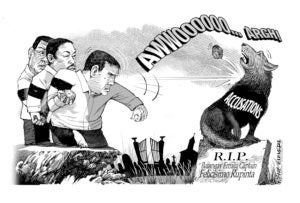 It’s been a week since Barangay Ermita Captain Felicisimo Rupinta had been killed while heading home at Liloan town, yet Cebu City Mayor Tomas Osmeña simply cannot restrain himself from insulting the memory of the barangay official by accusing him anew of being a drug protector.

Simply and bluntly put, the mayor said Barangay Ermita residents now have the opportunity to rid themselves of the drug menace now that Rupinta — whom he accused of allowing the likes of suspected drug dealers Franz Sabalones and Jeffrey “Jaguar” Diaz to operate with impunity in his area and neighboring areas — is gone.

Some believed that the mayor issued the statement in response to Councilor Raymond Garcia’s insinuations that he was behind Rupinta’s murder, and he made a Facebook post in which he disputed the councilor’s point.

“If I really did kill Imok Rupinta because he is a political opponent as Garcia wants people to believe, then why is Garcia still alive?” the mayor stated in his Facebook post.

Osmeña simply could have left it at that and not bothered to comment on Rupinta’s death since he himself previously said he won’t issue a statement on the Barangay Ermita captain because he knows his political foes will make political capital out of it.

The mayor may have been provoked, or he just wanted to say something bad about Rupinta. Whatever his motivation was in expressing his gratitude for Ermita to start on a “clean slate” and blaming Rupinta in the process, Osmeña’s words didn’t only leave a very bad taste in the mouth.

He may just as well, to put it bluntly since it is the mayor’s fashion not to mince words, spat on and performed a victory dance at Rupinta’s wake. How does that look to the public at large, those who are neither his loyalists nor his critics?

In issuing the statement against Rupinta, the mayor also didn’t bother to hide his disgust at the opposition for insulting him, citing in particular how they played up his health problems to city voters and made it appear that he didn’t have long to live.

The mayor’s statements may be cheered on by his loyalists, but what about those constituents who still believe in respecting the memory of the dead, especially one who had been murdered like Rupinta who cannot defend himself from the mayor’s accusations?

The mayor could have waited for some time to pass — the customary 40-day mourning period as observed even if he isn’t mourning for him — before he spoke out on Rupinta, who, to his credit, did make some effort to wage an anti-drug campaign that Osmeña himself agreed with.

But Osmeña couldn’t be bothered with observing the most basic courtesy of respecting the memory of the dead, a value adhered to by most religions in the world.

That said, it remains to be seen whether the mayor’s statements will resonate with Barangay Ermita residents especially those who still support Rupinta. In the end, they decide if they believe in what Osmeña says about their barangay captain or not.