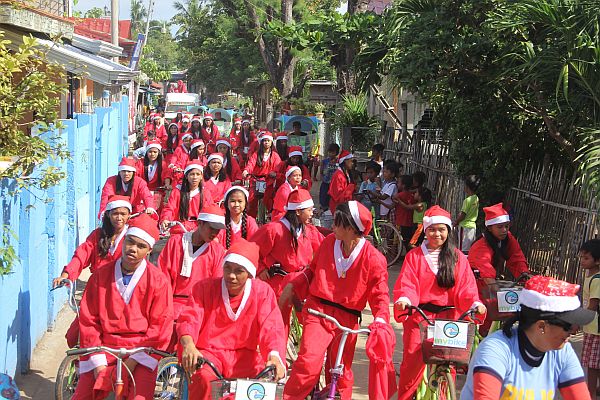 A hundred and fifty Santa Claus bikers roamed the villages of Olango island giving candies and other presents to the children seen along the way.
CDN PHOTO/Norman Mendoza

Imagine a bunch of youngsters dressed as Santa Claus pedaling their bicycles around your neighborhood.

For hundreds of children in Olango Island, Lapu-Lapu City, the excitement was hard to contain as 150 bikers swept through eight villages on the island, bearing gifts, Wednesday.

The Santa Claus bikers brought with them packs of candies and some toys for children who greeted them along the way.

Members of the Philippine National Police (PNP) joined the bikers this year to guide them around the different villages.

For the people of Olango, the spectacle has become part of Christmas tradition since 2013 when the Lapu-Lapu City government devised the program to bring tidings of joy to residents of the city’s remote island villages.

The parade of the Santas on bicycles signals the start of a three-day event called “Kiddie Land” which will be held at the Mini Hoops Dome in Barangay Talima to give young children in the island a taste of the holiday spirit.

Frances Nicole Balao of the city’s tourism office has been the person in charge of Kiddie Land for four years.

Balao said that over time, the events have become more fun.

“It really takes a lot of preparation such as bringing the facilities here in the island but all of this hardship is dedicated to the children who are looking forward to this very exciting event in their lives,” Balao told Cebu Daily News.

This year, members of the city’s youth organizations have volunteered as Santa Claus bikers and assistants for Kiddie Land, where children get to enjoy free amusement rides, shows, and food.

People from Olango’s neighboring islets of Caubian, Pangan-an and Caohagan are expected to join the event which is expected to draw around 10,000 young island villagers.

Kiddie Land will also be held in mainland Lapu-Lapu City on December 29 and 30 with some 12,000 kids in attendance.