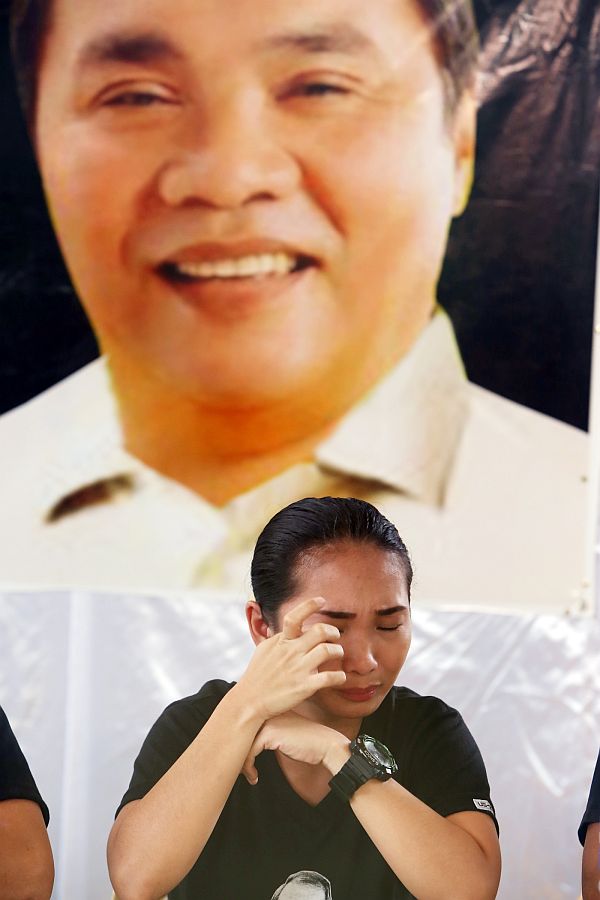 Newly appointed Ermita Barangay Councilwoman Efe Rupinta is in tears as she discusses the update on the murder case of her father, Barangay Captain Felicisimo “Imok” Rupinta (picture, background) during a press conference with other barangay officials headed by now Barangay Captain Mark Rizaldy Miral on Thursday, Dec. 28, 2017. Just hours after the press conference, the police announced the filing of murder and frustrated murder charges against the alleged mastermind, Winefredo Miro.
CDN PHOTO/JUNJIE MENDOZA

At around 1 p.m. yesterday, the Regional Intelligence Division (RID-7) filed the two cases against Miro at the Cebu City Prosecutor’s Office, barely 24 hours after Espino promised that the mastermind in the Rupinta ambush-slay would be revealed before the year ends.

Miro, who is also the son of a former barangay captain of Ermita, immediately belied the accusation, stressing that while it was true that he and Rupinta belonged to opposite political fences, he had nothing personal against the slain village chief to wish for or order his death.

(Actually, I was surprised that my name was mentioned. What is their evidence? I will just wait for the subpoena because as of now, I still don’t have any idea what’s their basis. I can’t answer unless I see the affidavit they submitted.)

The filing of the charges against Miro also came just hours after some 1,000 residents and barangay officials of Ermita signed a petition expressing dissatisfaction that the mastermind was yet to be named, over a month since Rupinta was waylaid and killed in Liloan town on November 23.

Ermita Barangay Captain Mark Rizaldy Miral, who took over the post from Rupinta, then told reporters that while they were happy with the arrest of the two alleged gunmen, they were still unsatisfied that the “mastermind” was not yet named.

The petition was supposed to be sent to President Rodrigo Duterte today.

Rupinta was driving his vehicle with his common-law-wife, Jocelyn Mendoza, when they were waylaid by two men riding in separate motorcycles and ambushed in Barangay Tayud, Liloan on the evening of Nov. 23. Rupinta was shot four times, including one in the head, and died before reaching the hospital. Mendoza survived the incident.

Espino yesterday reiterated that they had ruled out politics as the motive in the killing of Rupinta.

The regional police director said that the evidence gathered by their investigators all pointed to an alleged conflict between Rupinta and Miro over “financial statements” and internal issues related to the vendors at the Carbon Public Market, Cebu City’s premier public market which is under the jurisdiction of Barangay Ermita.

“The motive from the very start is the internal conflict of the two (Rupinta and Miro) on the vendor’s association,” Espino said.

He added the fact that the two alleged gunmen — Jimmy Largo and Jordan Gera — were also vendors at the Carbon market added to the belief that the incident was related to Rupinta’s conflict with the vendors.

Rupinta had a run-in with fish vendors at the Carbon market, particularly those belonging to the Calderon Barracks Association (CBA) that has at least 90 members, after they were ordered by the village chief to move to the back of the market in October.

The fish vendors had protested the move, saying they lost precious customers because of the order.

These were the same fish vendors who also protested the daily “arkabala” (fee) of P10 collected from them by the Ermita barangay government. The barangay was forced to stop collecting the arkabala after Cebu City Mayor Tomas Osmeña declared that only the city government, not Rupinta or the barangay council, had the authority to collect such a fee.

Rupinta’s decision to move the fish vendors out of Calderon Street and to the back of Carbon market was implemented without notice in late October, soon after the barangay government stopped collecting the fee.

Espino yesterday said the police have strong evidence against Miro and the two alleged gunmen, including alleged accounts of witnesses pointing to Miro as the mastermind.

“We have a very strong evidence. One is the contact meeting and piece of paper na siya (Miro) nagbigay (to the gunmen),” Espino said.

In a copy of an affidavit of Mendoza obtained by Cebu Daily News, she claimed that Miro allegedly “orchestrated the assassination of Rupinta taking into consideration the long-standing feud between Miro and Rupinta for the control and dominance of the vendors association and other sources of income at the Carbon market.”

Another witness, Rolando Pacres, submitted an affidavit claiming he was approached by Largo to kill Rupinta for P150,000.

He said that he and Largo belonged to the same group of hired killers that was active from 2010 to 2016.

Pacres claimed it was Largo who told him that the order allegedly came from Miro.

Pacres, in his affidavit, also claimed he eventually met with Miro sometime in September this year at the latter’s house in Ermita.

He claimed that Miro oriented him as to the route of Rupinta from Carbon to Liloan, where the village chief has maintained residence with Mendoza.
He also claimed that Miro gave him a “small pink cartolina” where the model and plate number of Ruipinta’s car were written.

Miro, 42, and who is currently the operations head of the Cebu City Markets Operations Division (MOD) yesterday, said he could prove his innocence even as he had no idea yet what evidence the police were holding against him.

Miro, a resident of Sitio Bato in Barangay Ermita, is married and has four children.

Miro was also a Sangguniang Kabataan (SK) chairman of the barangay from 1996 to 2002. He ran and won as barangay councilman of Ermita from 2002 until 2013. His father William was also the former barangay captain of Ermita from 1994 to 1997.

During his stint as a barangay official, Miro has been affiliated with the Bando Osmeña-Pundok Kauswagan (BO-PK) party of Cebu City Mayor Tomas Osmeña. There was a time when they were on the same party as Rupinta until the latter bolted in 2013 and joined Team Rama headed by then Cebu City Mayor Michael Rama.

(Honestly, we don’t have personal conflicts. Or, perhaps, their side thought that way. For me, I am just doing my work. But it’s possible that if it’s an election, we can end up having a conflict since we are from different political parties)

Aside from engaging in barangay politics, Miro also spent over a year with the Land Transportation Office (LTO) in Cebu City, where he was assigned to the public assistance and complaints desk from 2015 until 2016.

In fact, he became an online sensation in May last year when a Facebook user posted a photo of Miro happily attending to waiting applicants at the LTO. The post received more than 80,000 likes and was shared more than 8,000 times.

The user said Miro was already on his desk even before his 8 a.m. schedule and “gladly” addressed inquiries from applicants despite the heat.

Miro yesterday said he only wanted to earn a decent living for the sake of his family. But now that he is linked to the Rupinta ambush-slay case, Miro said he is worried for his family.

He added: “Nag labad pa gyud akong ulo kay wala pa koy abogado. Wala pa gyud koy kwarta. Mangutang pa tawon ko para makakuha kog abogado (I still don’t have a lawyer and I don’t have money. I will have to take out a loan so that I can get a lawyer),” Miro added.

Miro was appointed by Mayor Osmeña as operations head of the MOD in July last year when he assumed as city mayor.

This year, Miro and Rupinta have been involved in some problems in the barangay, including the alleged illegal demolition of stalls of some fish vendors at the back of the Carbon Public Market by the barangay.

Miro also objected the barangay’s collection of a P10 “voluntary contribution” from vendors at the Carbon Public Market.

Read Next
Resiliency to calamities