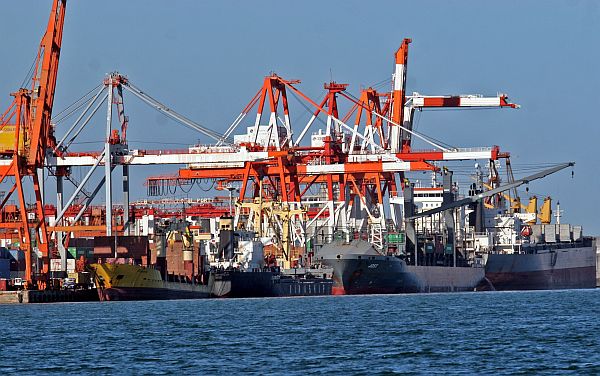 The new Cebu international port project in Consolacion town in northern Cebu will bring more progress and decongest the Cebu City port (above) when the project will be completed in the next couple of years.
CDN FILE PHOTO

With the construction of the new international port in Consolacion town in the pipeline, more developments are expected northward in the coming years.

The new international port, which will be located in Barangay Tayud, is already being processed for bidding of its construction contractor, according to the Cebu Port Authority (CPA).

“It’s the DOTr (Department of Transportation) which is spearheading the project. The latest update we received is that the DOTr is doing the procurement activities like the bidding and receiving of the loan from the government of Korea,” said Karen Gonzales, CPA’s senior corporate lawyer.

According to Gonzales, the Philippine government is already set to sign the loan agreement with the Korean government through the Korean Export-Import Bank.

The CPA is eyeing a 12-hectare site in Barangay Tayud for the new international port which is aimed to decongest the existing Cebu International Port (CIP) in the North Reclamation Area (NRA) in Cebu City.

Once the new international port will be put up, its expected benefits are not only seen to affect Consolacion but also in the entire province and even in neighboring provinces according to the Cebu Investment and Promotions Office (Cipo).

“It will greatly benefit not only Consolacion but the entire Cebu and Visayas, and even Mindanao because if you talk about an international port, there are goods dropped there. But that will also go somewhere,” said Roy Soledad, Cipo head.

And with a new international port, Soledad said more investors may come in and build plants, factories, or warehouses near the area.

Over the past years, he pointed out that developments have already started going northward and southward, away from Cebu City, Mandaue City and Lapu-Lapu City which have already become saturated.

He said developers have started exploring Consolacion, Compostela, Liloan and even up to Danao City in the north. On the other hand, in the south, they have gone all the way to Naga City and even Carcar City.

“Our only concern with that is it will cause additional traffic because of the trucks that will have to deliver. But that is being looked into by the provincial government and Mega Cebu which is already studying how to ease the traffic considering the influx of investors now,” Soledad said.

He said the Mega Cebu Development and Coordinating Board (MCDCB) has already contracted the Japan International Cooperation Agency (Jica) which is now doing studies on how to ease traffic problems within the Mega Cebu area.

Soledad added that they are hoping that results of the studies will be out very soon.

In its Top 10 Predictions for 2018 for the Philippines, Colliers International has cited Cebu as one of the most feasible industrial locations outside of Manila.

“Colliers encourages industrial locators in the Visayas group of islands to consider Cebu given the island’s proximity to both local and foreign markets.

We believe that Cebu remains one of the most feasible industrial locations outside of Manila due to its strategic location and skilled manpower,” the report stated.

In the same report of Colliers, which is one of the country’s leading real estate agencies, it was also cited that the demand for warehouses and container yard spaces will become “more pronounced” this year.

It stated that the Mandaue City government has recently implemented an ordinance disallowing the presence of warehouses and container yards around the Mandani Bay area.

With this, companies in the shipping, logistics, and container yard sectors are in a rush to look for other locations.

And with the expected new international port, Consolacion could be their place to go.

Robert Go, president of the Philippine Retailers Association Cebu Chapter, believes so too.

“It’s a natural flow. With the international port there, people will be putting up near the port. And with the very high value of lots in Mandaue City, people are going farther away and also staying away from traffic in Mandaue,” Go said.

“It is not viable to put up warehouses there (in Mandaue City with the traffic), otherwise, you can’t move in and out your goods,” he added.

As early as now, Go said companies have started going to the Consolacion area especially after the new Cansaga Bay bridge and after lots in Mandaue City started increasing in value.

But for now, these companies are staying within Consolacion and not yet going all the way to Liloan.

Go said this is because Liloan is very far, for now — unless they don’t have any other choice.

However, he pointed out that Liloan will eventually become the place to go as well once the new international port will be established in Consolacion.

Based on the Colliers report, industrial land values in the northern parts of Mandaue City, Consolacion and Liloan are expected to grow by at least 10 percent annually over the next two to three years.

“The increase in rates will be supported by rising demand from logistics and warehousing firms due mainly to expansion of e-commerce platforms Lazada and Zalora in Cebu,” the report stated.