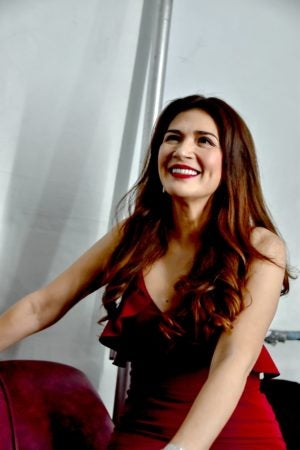 While some snootily pontificated that she was not blue-blooded enough for the required degree of madness, Zsa Zsa Padilla has had other qualities far more important.

Like many classic television star before her, she arrives to her showstopper scenes with a showstopper gown to match them.

Playing Helena Montoya — alias Red Dragon, the evil mastermind on the afternoon series “Wildflower” on ABS-CBN — she is seen in much of the earlier episodes wearing the conservative business attire typical for the times now; skirt suits with high necks or shirt dresses with echoes of menswear to match the almost exclusively male world that surrounds her.

But at the intensity of the pivotal revelation, the character has been an explosion of flamboyance — boldly abstract but bursting with retro femininity.

“Hindi naman daw ako kontrabida material —and it hurt me so much,” she continues, recalling the earlier stage of development.

Never one to shirk a challenge, Zsa Zsa is a shape shifter.

For starters, she is the least classifiable artist in the country.

For now, Red Dragon is the pulse of her career.

But she has always been metamorphosing for art’s sake.

As a comedienne, she has starred in films like “Mano Po 4: Ako Legal Wife,” “Zsa Zsa Zaturnah: Ze Moveeh” and “Bes and Beshies.” Drama and romance — “Madrasta,” “Pahiram Ng Isang Umaga” — are up in her sleeves, too, along with over 20 television shows since 1983.

On the lost, lonesome veterans of heartbreaks shuffle her hit songs anytime — “Hiram,” “Ikaw Lamang,” and“Kapag Puso’y Sinugatan” — and trust in her supremacy as the country’s “Divine Diva.”

There’s an eclectic feel to this year’s ranking of possible new undertakings. On Feb. 10, she will channel her kind of music in a concert, “Beginnings,” at the Grand Ballroom of the Waterfront Hotel and Casino in Lahug, an early Valentine’s gift.

Our walls whisper to us. He said, she said … Is she getting married?

As always in her life off-camera, she is about individual taste, not some fake finds in show business, so only one real through emerges; her exquisite self-expression.

Today, she is creating a new sophistication by sampling, in a subtle way, these traditionalist totems.

And the more pressing issue out in the open — is red really her favorite color?

Is red your favorite? 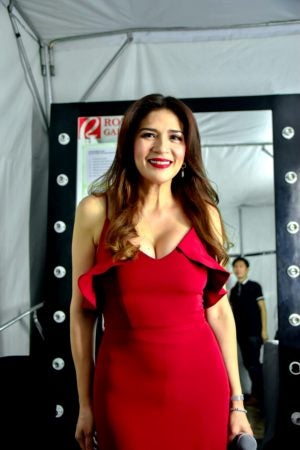 Are you not scared of being typecast as Red Dragon’s character?

No. This role is not typecasting. Actually, they want a typecast — the reverse.

That is how I was perceived in the beginning, and it hurt me so much. I was like feeling … sana they gave me a chance to get to know the character better why she’s like that. She’s flamboyant.

She uses her arms. She’s like all these jewels and sweet.

But of course, that is Helena Montoya.

Helena Montoya is the one that people of Ardiente know about, but later she was divulged as the Red Dragon.

How did you prepare for it?

Actually, there were several fierce looks we had to study.

’m a natural squinter when I’m mad, but it was coming off more as nakakaawa, so I had to be angry dilat.

I had to study that kung ano ang mas bagay.

You’re timeless. You’ve transcended from different generations of audience. What is the secret to that?

Oh, thanks. It’s actually hard because this generation knows me more when they see me on TV as Red Dragon.

“ASAP” kasi now, we’re semi-regular because we all want to give chance to everybody there.

Ilan ba ang artists ng “ASAP”? There are about 54 artists, and we cannot be in one show all the time.

So parang Gary (Valenciano), Martin (Nievera), and I would go there like twice a month. Because we have less portions there.

Singing and acting are combined in one character.

The younger generation does not know my music.

But I am glad that through this teleserye, “Wildflower,” I am able to sing like the French song and “Maging Sino Ka Man” to display naman my singing skills kasi my character is like that, eh.

Parang in the beginning, they could not accept me as Red Dragon because they said I was not fierce; I’m not material for kontrabida.

But later on, they (producers)understood that the character called for somebody who’s sweet and charismatic to people, but she had another personality — she’s like the queen of the underworld.

Would you be doing stunts on “Wildflower”?

Not so much. There’s very little. Our fight instructor is the same instructor I had in Wushu when I did “Zsa Zsa Zaturnah” (movie) a couple
of years back in my 40s.

But of course, I was a lot stronger then.

I try to keep fit by working out, but now, my voice is a little bit tired because of coughing. I think it’s more allergy-based because of the dust. Somehow, it’s also season for cough. 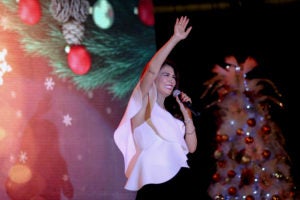 Do you have creative control over the development of your character?

I do, but it’s all collaboration from the three directors that we have.

But in the beginning, when we were forming the character,our unit head Roel Bayani … we have history of working together.

He used to be a writer for “Star Drama Presents.”

He was my director in “Budoy,” so when he was explaining this character, when we were developing it, iba pa yung concept.

There’s one character thatI have in mind that I kind of copy.

And Maja and other casts have said, “Naku, Ms. Z, ganun din kami sa umpisa. They were saying so much until I realized that the show has a rhythm or cadence.

It’s a little slow. When the characters would throw their lines, they’re savoring every word.

You are not just throwing the words.

So kung makukuha mo na ang rhythm ng co-stars mo, then once I’m on set, I know how it is to be Helena.

Would there be a conversion of Red Dragon’s character?

No. More evil. there’s no turning back for her.

She would still be keeping up with the pretenses.

She even denies being the kontrabida.

She says that she’s Helena Montoya — “I help the poor” and “I’m a philanthropist. ”

She is still at that stage. She does not want people to know that she is Red Dragon.

So she continues to struggle, make people think that even with the revelation of Maja … kasi naka-escape siya, eh.

You did comedy and drama movies and TV shows. How do you identify yourself: The antagonist, the protagonist, the comedienne?

Any. I like comedy. But being an antagonist is fun. It’s fun.

With Red Dragon naman, it’s draining to be angry all the time, but if you know how to pace yourself, well, I guess it gets easier.

You captured a rather elite circle of audience, as well.

When I started to sing, I realized my market was for the ballroom, mga ganyan, but I really enjoy doing mall shows also.

What brings me closer to my audience is my television persona because it has a wider audience.

We fight in high heels. There are helicopter scenes, nice cars, mansions, ganyan.

Do you have a New Year’s resolution?

Wala. None so far. I would be breaking it, anyway.

Tell us about your Valentine’s Day concert on Feb. 10, 2018 (at the Grand Ballroom of the Waterfront Cebu City Hotel & Casino).

That’s exciting. It’s taken from a show I did a couple of years back and from the last album, “Beginnings.”

Of course, we will inject so many other materials there.

I’m working with a great band; my musical director is going to be Homer Flores, and the band of ASAP.

We rehearsed with them for a few sessions; they gotit right to the pattern.

I’m looking forward to that show and spreading love on Valentine’s Day. And mostly, it’s a charity show … so I have to “behave” with my costumes (laughs).

What is your favorite Zsa Zsa Padilla song?

“Hiram,” “Kahit Na.” These were my first hit songs. I like the other theme songs that I have had eh, I like “Ikaw Lamang,” and I always do that.

I like “Mambobola,” “Point of No Return.” Lahat na-mention ko na (laughs).

How do you connect your music to the young listeners?

There is a problem. It’s unfortunate though that we come out with original songs, hindi nila nasasakyan because my generation does not want to hear  new songs anymore.

I have an answer to that. The new generation could listen to free music, which is Spotify. I know naman eh that there will come a time, especially my apos would ask:

They’re not free because I know a lot of people, especially in this generation that music comes for free.

Music is life. I think it will always be there.

And even if I’m gone, I would be happy to know that my music would still be around.

Is mothering Karylle and Zia, who are also singers, difficult?

I am just very careful not to compare how I do things. I do not like to say:

No, because I understand and expect that my children have to develop their own styles.

It does not take a person overnight to do this.

It takes years to find your own voice.

And to be told how to do stuff my way is not appropriate.

So I never do that. But I do make suggestions for arrangements.

That’s how I do things.

No concrete plans on the wedding.