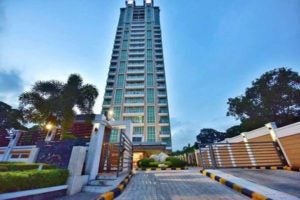 Second generation members of the families of the Barinos and Mantuhacs, owners of the Duros Group of Companies,(right) are given a chance to grow further the legacy of the family-owned enterprise. Above, Padgett Place in Cebu City is one of the major projects of the group.
CONTRIBUTED PHOTOS

After establishing a foothold in Cebu’s vibrant and competitive real estate sector, one of the home-based family-owned companies that has endured and thrived in the industry for three decades is banking on its next generation leaders to continue the legacy of the family-owned enterprise.

Rafaelito Barino, Duros Group of Companies chairman, said there are 18 family members, between the ages of 21 and 35, who hold key positions in the 11 companies under the Duros Group.

The Duros Group is a conglomerate of businesses in real estate, construction, interior fabrication and manufacturing, property management, education and food.

“We trust that the 2G (second generation) will continue the legacy of the Duros Group … to take on the responsibilities and tasks that we built in the last 30 years,” said Barino during his fifth State of Duros Address last January 5.

During his address, Barino reported that Duros Development Corp., the construction arm of the Duros Group of Companies, was able to close P2.3 billion worth of vertical projects in 2017.

Barino said these also include government contracts of roads and bridges.

Of the P2.3 billion, a total of P1.3 billion worth of projects were accomplished last year.

These companies are run by Barino, his wife Fe Mantuhac-Barino and Fe’s nine siblings.

Rhea Mantuhac, chief finance officer of Duros Land, joined the company in 2006 after she earned her Management Accounting degree at the University of San Carlos.

Her father, Ricardo, is involved with Duros Land.

“Two years into being employed in the family business, I realized that there are many people who rely on their Duros Group employment as their source of income. I keep it in my heart the responsibility of doing my job well because we have employees who rely on us to feed their families,” said Mantuhac.

Duros Land is also the developer behind condominium project Padgett Place in Barangay Lahug and 23 Minore Park in Barangay Mabolo which integrated the IEC Convention Center Cebu (IC3), the Landers Superstore, an upcoming hotel and the central park amenity.

Noel’s father, Edgardo, the eldest of the Mantuhac siblings, is with San-Vic Agro Builders based in Toledo City, Cebu.

Fe Barino, who sits as the company’s vice chairperson, said they have always thought about training the second generation as part of the business succession plan.

They seriously implemented the plan when IC3 was built and 25-year contract was signed with the Archdiocese of Cebu. IC3 was the main venue of the 51st International Eucharistic Congress, which was attended by more than 15,000 participants coming from all over the world.

She said the Duros brand became popular after the IEC, and they saw the need to involve the second generation as the business grew.

“Having the second generation of leaders ensure quality and sustainability of our projects, we also aim to pass on to them, not just lessons on how to make profit, we teach and show them good business ethics,” she said.

In his address, Barino said they were able to convert 53 rooms of Padgett Place into suites with full hotel operations.

In the last quarter of 2017, the company was able to sell 12 two-bedroom units.

Barino said Fiesta Minore, which opened last April 2017, will only operate until January 31, 2018 as it gives way to the 12-storey Fiesta Minore tower which will bring together hotel, retail and office operations.

Construction will start on the second quarter of 2018.

Back in their home base of Liloan, Barino said One Tectona Tower, located within the Japanese retirement enclave called Woodlands Resorts, will begin construction on the first quarter of 2018.

The Woodlands Clubhouse will kick off construction this month.

To complement the needs of the retirement development, the Divine Life Institute of Cebu has signed a joint venture agreement with LEOC Corp. of Japan to start operating a Japanese language school in Liloan.

The need to learn the Japanese language is also important for Filipino workers as Japan expects at least 20 million workers to retire in 2020.

“(Learning the language) is one solution to their manpower problem. They need the manpower to replace retiring Japanese workers,” he said.