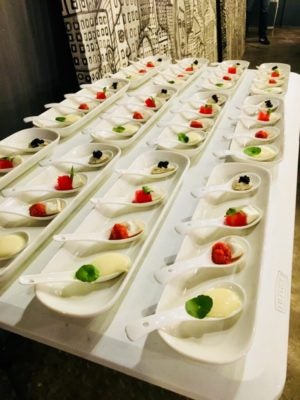 WHEN I started working in the kitchen as a serious homecook, I first fiddled with my mother’s recipes based on my memories of childhood Sunday meals; homey homegrown flavors that have become the basis of my cooking. Soon, I discovered that so much art and refinement could go into cooking, elevating dining and the whole tedious process of cooking into a whole new creative experience for me.

I was drawn into the idea of how science—and a cook’s imagination—in what they call modernist cuisine could transform and highlight flavors,
textures, colors, even shapes of food on a plate, working like some kind of sorcery in cookery.

In less than six months of home-cooking, I was already tinkering with modern flavor pairings (I learned that there is science to
doing flavor combinations, at a more molecular level, in a dish, apart from a cuisine’s cultural and topographical references), cooking sous vide, working on new culinary techniques—spherification, gelification, emulsification, foaming, etc.—with modernist ingredients.

But, somewhere along the way, I realized something was missing in my culinary journey; I thought I had to learn classical methods, something that would ground me and my cooking, and act, at the same time, as my point of reference.

So I studied classical French cuisine, through Auguste Escoffier’s cookbook (I cannot imagine the extent I went to procure my ingredients), enrolled myself in Gordon Ramsay’s online Master Class, and acquired formal training in cookery, a total of nine months in an actual culinary school, the International School of Culinary Arts and Hotel Management (ISCAHM).

And finally, I earned my National Certificate-II (NC-II) for Cookery a couple of weeks ago!

So, where to go from here? After watching Chef’s Table’s episodes on Gaggan Anand and his new progressive Indian cuisine, Virgilio Martinez and his modern Peruvian cuisine, and a few documentaries on MAD and Rene Redzepi’s quest for a new Nordic cuisine, it dawned on me that not much has been done to explore, update, and push Cebuano cuisine, and the whole gamut of the flavors of our terroir, to make them relevant to the present, and perhaps, the future. Because, somewhere, I know, there must be more to our local cuisine than just SuTuKil.

Two Sundays ago, I held a degustation dinner at my atelier for some of my friends, writers and artists who I had the chance to work with at the now-defunct daily broadsheet, The Independent Post. Specifically for this event, I created a new 7-course menu that showcased the recipes I worked on the past few weeks prior to my NC-II exams, most of which were my modern take on old Cebuano delicacies., using local produce, herbs, usually considered weeds but which I have been growing in my small home herb garden.

For my first course, I created a 4-piece suite of amuse-bouches: locally-made yoghurt which I turned into a sphere, paired with local gotu kola; local goat’s cheese (which I had to source from Compostela) with red pepper puree; pickled local goat’s cheese with compressed watermelon topped with sangig; and tinapang bangus pate which I paired with my homemade sushi ginger and truffle caviar spheres. I explained to my friends/guests that the idea behind it was to push new flavor pairings, how I tried to combine and balance flavors according to their nuances and degrees of intensity, while teasing their palate at the start of the meal. That should set the tone for the rest of the dinner.

Because of my “acquired” love affair with beetroot, a newfound love that I wanted to share with my guests, I made a simple beetroot salad, which I combined with white onion, parsley and gotu kola. You can say, guests at my dining table cannot simply escape beetroot: in my previous degustation dinners, I served beetroot sorbet as palate cleanser served between courses.

One of the surprises of the dinner was my modern version of the Kinilaw, inspired by Gallery Vask’s Tiradito dish. By deconstructing its ingredients I was able to create a modern incarnation of the lowly local dish, which Resil Mojares calls a survival food, while trying to retain its essence and flavors.

What I did was I used the age-old technique of curing fish.

I cured my yellowfin tuna fillet for 24 hours in a vodka-calamansi mixture with sugar, rock salt, native lemon zest, roasted peppercorns, coriander seeds, fennel seeds and fronds, to infuse layers of flavor and aroma to the fish. (In kinilaw, you cannot soak your fish meat for so long in vinegar, lest you lose the flavor and color of the fish and overcook its meat.)

Because the Cebuano version of the kinilaw, according to Doreen Fernandez’s book, Kinilaw, uses coconut milk, I decided to do a coconut-calamansi jelly to remain faithful to the old dish.

What is a Cebuano feast without lechon or its pork component? Main course was my new recipe of pork belly dish, which I made for our final cooking test at ISCAHM. I’ve done the dish thrice already and it never failed each time.

So I thought I had to serve it for this dinner.

Then I cooked it sous vide for 36 hours at 70C, which rendered the meat covered in its own gelatin, and so tender you don’t need a knife to cut it.

And right before serving, I seared it to give it some color and caramelization, and shoved it into the oven at 200C for about 10 minutes.

I remember, in my childhood, I had this odd eating habit of dipping my cucumber in peanut butter. Thus, cooking from memory, I concocted my first dessert for this dinner, which combined the flavors of peanut and cucumber in a dish.

Cucumber was done two ways: half of it was pickled in vanilla syrup (the mix was sous vide for a few minutes), and the other half smoked.

For the peanut component, I made a masareal sorbet (it’s a must-try, I tell you!), masareal being one of my favorite childhood snack. I finished the dish with a sprinkling of parsley oil.

I have a penchant for desserts that blend sweetness with fresh and savory elements, as evidenced by my first dessert.

The second one is another example of it, with layers of flavors and textures: Budbud. To achieve a smoother consistency of my budbud, I had the arabon grains ground, before cooking it in a pot with coconut milk (the first press) and pandan juice.

I am still in the process of fine-tuning my recipes and presentation (and incorporate both native and modern techniques).

My friend, Ram, and I will be going on a foraging trip around Cebu, in the coming months, to look for and identify endemic edible plants and herbs (and maybe, seaweeds and insects?) that I can use in my work in the kitchen.