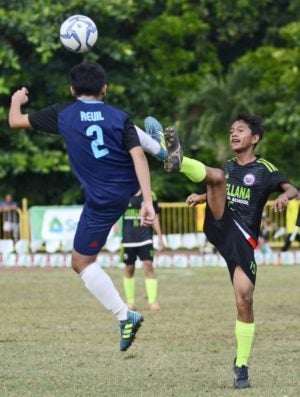 A booter from Don Bosco Technical College kicks the ball midair against a booter from Abellana National School during their under-13 boys showdown in the 8th Sinulog Football Festival.
CDN PHOTO CHRISTIAN MANINGO

Ethan Roxas scored a penalty as Springdale prevented Don Bosco from winning its third title in the first day of the 8th Sinulog Football Festival 2018 at the Cebu City Sports Center yesterday.

With the U7 Mix and the U9 Mix titles already in the bag of Don Bosco, the school’s team A was on course to capturing their third title for the day.

However, after losing the U7 Mix title to Don Bosco, Springdale was not about to concede another crown and successfully clinched the U11 Mix title via a 1-0 thriller.

Roxas scored the penalty 10 minutes into the match that resulted from a handball.

Springdale advanced to the championship after nipping Don Bosco C, 1-0 in the semis. In the quarterfinals, Springdale outsmarted Ateneo, 1-0.

Don Bosco A, for its part, bagged a finals ticket also at the expense of Springdale’s sister team, 1-0. In the quarterfinals, the team defeated Talisay Razkals, 3-1.

The U11 Mix was the only category that was not decided by a penalty shootout among the four categories that were already done as of press time.

Don Bosco was hailed as the new champion of the U7 Mix category via its team E which frustrated Springdale, 1-0, via a shootout after regulation ended scoreless.

While in the U9 Mix, Don Bosco defended its title with its team E prevailing 3-2 over Ateneo also via a shootout following a scoreless draw.

Tayud United FC frustrated LNHS-King Forest FC, 1-0, in penalty shootout to become the new champion in the U15 Girls which was the only category that was played in a league-type format as there were only six entries.

LNHS-King Forest FC was not able to capitalize on its immaculate 5-0 elimination record against Tayud which finished at the no.2 spot with four wins and 1 loss.

Categories still being contested at press time were U13 Boys, U15 Boys and U18 Girls.

Tournament director Glenn Quisido said the start of the tournament was delayed for an hour following a heavy downpour.