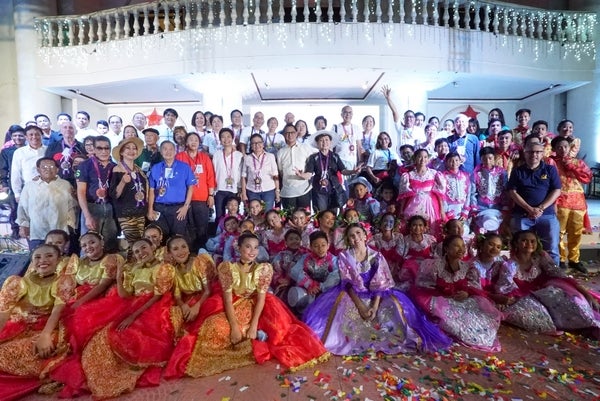 Guests pose with Vice Governor Agnes Magpale (standing front row, 7th from left) and other city and province officials during the culminating program of the Suroy-Suroy Sugbu 2018 that was hosted by the Talisay City government last January 26. contributed photo

“Akong na-amaze kay welcome ta tanan sa kada town. The people were hospitable (What amazed me was the warmth of the welcome in every town we visited),” said first – time participant Heracleo Salgado, 76, a Madridejos native who is now based in the United States.

He and the other 36 guests went to the towns of San Fernando, Argao, Dalaguete, Boljoon, Oslob, Samboan, Santander, Ginatilan, Alegria, Moalboal, and Barili, as well as the cities of Carcar and Talisay.

They got to taste local delicacies like Talisay City’s famous lechon, and were treated to cultural presentations.

Some went swimming with whale sharks in Oslob, canyoneering in Alegria, and waterfall trekking in Samboan.

Vice Governor Agnes Magpale asked the guests to spread the news about their Cebu experience.

“Please tell your relatives and friends … nindot na kaayo ang Sugbu nga inyong gibiyaan (that the Cebu you have left behind is now very nice),” she said.

She also thanked the participating towns and cities for their hospitality and for trying to “outdo” each other in accommodating the guests.

Read Next
What’s next for Joseph Marco?