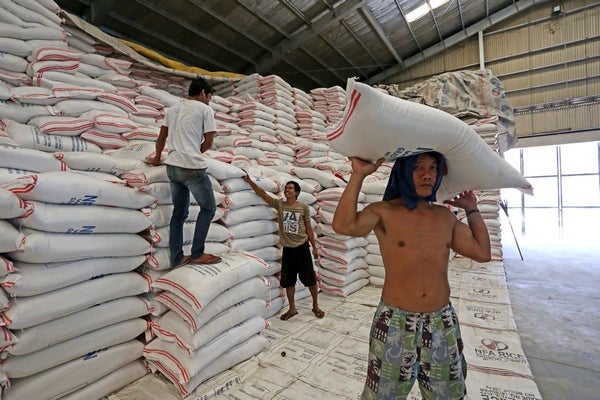 As the supply of rice from the National Food Authority (NFA) continues to dwindle every day, detention facilities such as the Cebu Provincial Detention and Rehabilitation Center (CPDRC) are now faced with the dilemma on where to look for alternative rice sources.

The provincial jail needs to feed its 3,691 inmates and, according to CPDRC staff member Carl Dela Cruz, they already sent a letter to NFA Central Visayas (NFA-7) Office requesting for additional sacks of rice as their supply will only feed the inmates until today (February 9).
CPDRC is yet to receive a reply from NFA-7, he said.

But by the looks of the current inventory of NFA-7, which stood at 139,000 bags of rice as of February 5, it would only be enough for four days and way below the 15-day buffer stock requirement. This means that the request of CPDRC will likely be declined.

In fact, NFA-7 also got a request for 30 bags of rice from the Bureau of Jail Management and Penology in Minglanilla town (BJMP–Minglanilla), and the agency has to turn it down, said NFA-7 Information Officer Olma Marie Bayno.

BJMP–Minglanilla manages the Minglanilla Municipal Jail, which has more than 120 inmates as of September 2016.

“We already sent letters of notices to these agencies that the Central Office has directed us not to sell rice to other government offices. We stopped distributing rice since February 1. We’re prioritizing those which will be used for relief operations,” Bayno told Cebu Daily News yesterday.

At the CPDRC, Dela Cruz said they usually purchase more than 100 sacks from NFA-7 in one order.

“Last December, we ordered more than 500 sacks of rice from NFA. The inmates alone can consume 30 sacks per day or around 1,670 kilograms,” explained Dela Cruz.

The provincial jail, which is managed and ran by the Cebu provincial government, allocates 400 grams of rice per day for each of its 3,691 inmates.

(The jail’s number of prisoners is double than its designed capacity of 1,500 individuals.)

CPDRC Acting Jail Warden Roberto Legaspi said they were now looking for alternative sources of rice, and have coordinated with the Provincial Social Welfare and Development Office (PSWDO) and the Office of the Vice Governor to secure a supply of the staple from these offices.

“We have other sources that we can borrow from such as the PSWDO and the vice governor’s office,” Legaspi said in a text message sent to reporters yesterday.

A representative from PSWDO said their office has enough NFA rice that it could provide to the provincial jail in the event that the CPDRC administration would request from them.

The representative, who requested anonymity for lack of authority to speak on the matter, said their office actually has enough supply for relief goods that they could distribute to all the 50 local government units (LGUs) comprising Cebu province in the event of calamities or disasters.

“As of now, our supply is still enough. Our last purchase of NFA rice was in December 2017. At the same time, we sent them request for additional stocks, but we haven’t received any update. We’re still waiting for their advisory,” the source said.

Erwin Gok-ong, vice president for Cebu City North District of the Grain Retailers Confederation of the Philippines (Grecon), called on NFA to resume the importation of rice and properly distribute this rice to cities and towns that are not rice sufficient.

Gok-ong, an accredited NFA retailer and rice retailer at Carbon Public Market, said they received reports that around 700,000 sacks of rice reached Cebu in early 2017 but of this number, 200,000 sacks were distributed to Leyte and another 250,000 sacks were sent to Iloilo.

“My question is, ‘Why did they bring these sacks of rice to Iloilo and Leyte, which are rice-sufficient provinces? Last year, each accredited retailer was only given four bags of NFA rice per week,” said Gok-ong, also the chairman of the Cebu Market Vendors Development Cooperative (Cemvedco).

Limited supply of NFA rice fuels the increase of the prices of commercial rice as there are no other alternatives, said Gok-ong.

“The market operates under the law of supply and demand. In the absence of price competition in the market, the price of commercial rice will increase,” he said.

The daily price monitoring report of the Department of Agriculture in Central Visayas (DA-7) Agribusiness and Marketing Division as of February 8 did not report any increase in the prices of regular-milled rice (RMR) and well-milled rice (WMR).

According to the report, RMR or ordinary rice is priced between P45 to P46 per kilo while WMR or special rice is sold at P50 to P52 per kilo.

Daily monitoring is conducted by DA-7 in the public markets of Tabunok, Mandaue, Pasil and Carbon.

But Gok-ong said they already noticed an increase of P2 to P4 per kilo in the prices in the last two weeks. This is equivalent to P100 to P150 increase per 50-kilo bag of rice.

“Our request is for NFA to play its role of being the price stabilizer of the market. We should only stop importation if we are rice sufficient. But we are still not sufficient,” he told CDN.

NFA-7 has already called on government offices to use the remaining sacks of NFA rice wisely.

This followed after the NFA Central Office issued an advisory to prioritize distributing government-subsidized rice for relief purposes and as emergency supply in the event of calamities.

Bayno could not give a particular date as to when government agencies and LGUs can start purchasing rice from the NFA. This is because they will have to assess the situation and wait for the permit to start rice importation.

“We still cannot determine a specific date because it will depend on the approval of the permit to import rice again. In the event that the council approves the importation, then that’s time CPDRC and Minglanilla BJMP can purchase rice from us),” explained Bayno.

Prices of commercial rice in Cebu’s public markets have increased due to the limited supply of NFA rice.

Reslyn Belia, a rice retailer for over 20 years at the Carbon Public Market, said her supplier from Mandaue City had increased by P70 every bag of rice delivered to her, forcing her to also increase her retail price by about P1 to P3 per kilo.

Anacorita Pareja, who has been selling rice at the T. Padilla Public Market for more than 50 years now, said she was thinking about cutting her usual order of four sacks of rice to only two sacks to cope with price increase implemented by her suppliers.

Pareja added she only makes P50 in profit per sack of rice she sold, and the profit is not even enough to pay her medicine for hypertension.

Bayno said they have no authority to control the price of commercial rice and could only urge both suppliers and retailers not to take advantage on the great demand of rice because it would be the low income earners who would suffer the most from its high cost.

Instead, she said, they would summon any NFA-accredited retailers who would be found to have unreasonably adjusted their prices. If found guilty of rice price manipulation, Bayno said their office could cancel their license to sell NFA rice.

Right now, however, the authorized distributor could not even get their hands on NFA rice, as the NFA-7 had stopped distributing rice to at least 1,991 accredited retailers in the region since February 1.