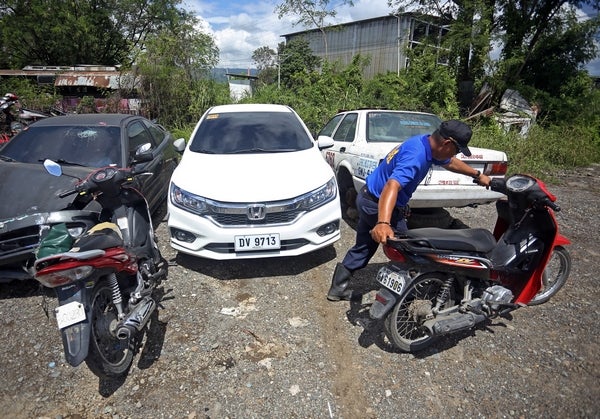 Aside from facing criminal complaints, the 27-year-old man, who shot at the wheel clamp placed by traffic enforcers on his illegally parked vehicle in Cebu City, may also lose his car.

Cebu City Mayor Tomas Osmeña said he would make sure Melbert Cerrantes Destriza would learn a lesson out of the incident.

“Impound (his car) forever, not 30 days, but until he is convicted because that is evidence of the crime,” Osmena said in a press conference on Thursday.

The police are set to file complaints against Destriza at the Cebu City Prosecutor’s Office for malicious mischief and illegal possession of firearms.

Supt. Conrado Manatad, chief of the Cebu City Police Office Traffic Patrol Group, said representatives of the Cebu City Transportation Office (CCTO) and a traffic policeman found an unattended white Honda City car which was parked on a sidewalk on General Maxilom Extension in Cebu City at past 7:53 a.m.

He said the traffic personnel then decided to clamp the vehicle with plate no. DV 9713.

When the traffic personnel left, Manatad said the suspect reportedly fired twice at the wheel clamp before leaving the place on board a motorcycle-for-hire.

A hot pursuit operation was conducted to arrest the suspect, but authorities could not locate Destriza.

The car was subsequently brought to the city’s impounding area at the South Road Properties (SRP).

Manatad said Destriza, who was identified through his live-in partner who resides in the place where the incident happened, might have been mad after his vehicle was clamped.

To make sure that traffic enforcers are protected from this kind of people, Manatad said he had assigned at least a policeman to accompany the team while roving the streets of the city.

“Their (traffic enforcers) job is risky. That is why they have to be accompanied by a policeman when roving the streets,” he said.

Read Next
Comelec exec: Gwen can file COC if she will run as gov in 2019 polls