GET READY FOR TRAFFIC NIGHTMARE 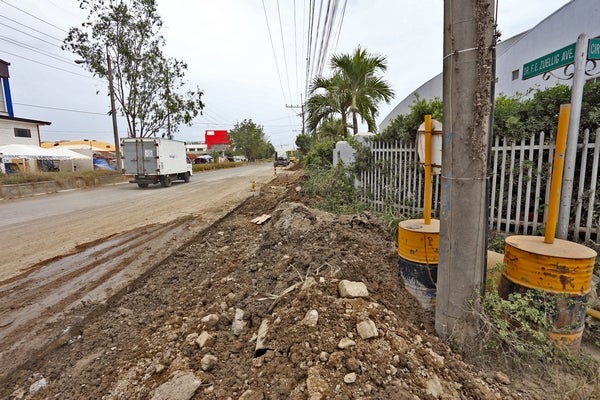 The Department of Public Works and Highways begins to clear and repair the Dr. F.E. Zuellig Ave. at the Mandaue City side of the North Reclamation Area that will be used as one of the alternative roads for the rerouting dry run on Feb. 27, 2018 that will precede the rehabilitation of Ouano Ave., a major thoroughfare in the city.

Hailing it as the “golden age” of infrastructure in Cebu, the Department of Public Works and Highways in Central Visayas (DPWH-7) is rolling out P1.75 billion worth of road projects in Metro Cebu starting in the first quarter of this year.

The bulk of the projects will be undertaken in Mandaue City, with at least P1.11 billion worth of road projects will be implemented in the city within the year, in addition to the ongoing tunnel construction project worth P638 million along N. Bacalso Avenue, which was started in August 2017.

DPWH-7 Regional Director Ador Canlas, however, warned that the simultaneous implementation of three road projects in the metropolis is expected to create traffic nightmare, which prompted him to ask Cebuanos to make some “sacrifices” for now.

Describing the projected traffic woes as a “happy problem” for Cebu, he said that Cebuanos should bear with the inconvenience that will result from the implementation of the road projects, which he assured will only happen for a “brief period of time.”

“Every sector affected by the project, I know, has to sacrifice. But this is a one-step backward, two-steps forward kind of thing. We have to make our adjustments and sacrifice a little because in the end, all of us will greatly benefit from it,” Canlas told Cebu Daily News.

His statement came a day after the private sector urged state engineers to complete the rehabilitation of the Ouano Avenue earlier than what was projected since prolonging it will lead to losses in their businesses.

But while they welcome the need for infrastructural projects to improve Metro Cebu, business leader Glenn Anthony Soco, who now chairs the

Infrastructure Development Committee of the Regional Development Council in Central Visayas (RDC-7), is asking DPWH-7 officials to be transparent in their project implementation.

“While we welcome (additional) projects for Cebu, we have to change the way things are done,” Soco said.

DPWH-7 is set to implement this summer the rehabilitation of the two-kilometer stretch of Ouano Avenue that connects S. Osmeña Road on the North Reclamation Area of Cebu City to Plaridel Street in Mandaue City.

Ouano Avenue serves as a parallel road to M.C. Briones that connects to the Cebu North Road. It is also one of the major highways used by trucks delivering goods between the northern and southern areas of Cebu province.

The project is worth P169. 961 million and is set for implementation for 360 days or nearly a year.

Its contractor, WT Construction Inc., which is the same contractor doing work in the underpass project in Cebu City’s N. Bacalso Ave. and F. Llamas Street, will scrape the existing asphalt from the eight-lane causeway and replace this with a 35-centimeter-thick cement.

But even before rehabilitation on Ouano Avenue can be completed, DPWH-7 is also set to begin the construction of a second road project at the United Nations (U.N.) Avenue which serves as the approach of the Mandaue City side of the Marcelo Fernan Bridge, the second bridge that connects mainland Cebu to Mactan Island.

Canlas told Cebu Daily News in a phone interview Saturday that as soon as they have completed concreting four inner lanes of Ouano Avenue, they will immediately proceed with the U.N. Avenue underpass project, which is worth P946.7 million.

Implementation of the underpass project in U.N. Avenue will coincide with the concreting works of the four outer lanes (two on both sides) of Ouano Avenue.

“By mid-July or August, we hope to finish one portion of Ouano Ave. At that time, construction of the U.N. Avenue underpass project will (also) start,” Canlas said.

The two-lane underpass, which has a span of 600 meters, will serve as expressway for vehicles coming from Mandaue City and are bound for Lapu-Lapu City on Mactan Island.

Other components of the underpass project include the construction of a flyover along Plaridel Street and two additional roads in U.N. Avenue.

While DPWH-7 implements the two road projects in Cebu’s northern corridor, the agency is also set to finish the P638-million tunnel project along N. Bacalso Avenue in Cebu City.

The tunnel project started implementation last August 8 and is set for completion in 2020.

On top of all this, the Metro Pacific Tollways Corporation is also set to begin in the second quarter of the year the construction of the P22.6-billion Cebu-Cordova Link Expressway (CCLEX) project that will connect Cordova town on Mactan Island to Cebu City.
CCLEX is also due for completion in 2020. (see separate story on page 2)

Businessman Robert Go, president of the Philippine Retailers Association (PRA) Cebu chapter, said that while Cebu needs all these big-ticket projects, there is also a need for DPWH-7 to make sure that its implementation are completed the soonest possible time to prevent business losses.

Soco, for his part, is seeking government transparency in project implementation, citing the instance when DPWH-7 failed to conduct public consultation to explain their U.N. Avenue underpass project prior to its awarding to a private contractor, BP Marketing Corp.

Soco added that he has many unanswered questions on the project implementation.

“The U.N. Avenue Tri-Level project is pushing through without much or any consultation done with its stakeholders. This has been a project which has been in the pipeline for several years and up to now there was no traffic management plan presented,” he said in a text message sent to CDN.

In the absence of a clear explanation, he said that business groups in Metro Cebu are given the impression that they were made to sacrifice for something which they suspect “could not solve anything.”

“While there is still time, let’s extract everything up to the last drop of options to come up with the best solution for the Cebuanos. In this effect, the IDC has requested the DPWH for an update of the project in our next meeting,” stated Soco.

This was also the sentiment of Gordon Alan Joseph, president of Cebu Business Club. In a separate text message sent to CDN, Joseph urged DPWH-7 to release the complete feasibility study and traffic management schemes to all stakeholders.

“They should also explain who the contractors are, what is their experience in projects of this nature, and release their audited financial reports that will show whether this unknown company is truly qualified and capable,” he added.

In response, Canlas said they could not delay the U.N. Avenue underpass project since its budget would revert to the national treasury if the project would remain unimplemented by the end of the year.

“The budget allocated is good for 2018 only. That’s why if we will not implement it, the budget will be returned to the national treasury and the project will sit around for quite some time before we can be granted once again with another budget. It will eat too much of our time, and efforts will go to waste,” he explained.

Canlas also said they will also have to fast-track the implementation of the Ouano Avenue rehabilitation project to take advantage of the summer weather.

He added that they would commence with the project implementation on Feb. 28 if they would not encounter any major problem during the scheduled traffic dry run on Feb. 27.

The project was originally scheduled to start during the first week of March.

Earlier completion of the Ouano Avenue road project is also expected to improve traffic flow in Cebu’s northern corridor when they start implementation of the U.N. Avenue underpass project.