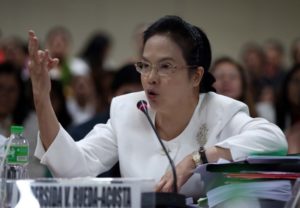 NINE-YEAR-OLD Wiljen Alcontin was a healthy, smart and playful kid who was administered the Dengvaxia vaccine along with her siblings last year.

Wiljen’s mother Teresa, a resident of Sitio Bugnay 1 in Barangay Labangon, Cebu City, said prior to the vaccination her daughter showed no signs of being sickly. That changed last Jan. 4 when Wiljen had a fever.

Wiljen was diagnosed as having contracted Urinary Tract Infection (UTI) based on the result of her urinalysis.

Wiljen was admitted to Sacred Heart Hospital the following day after the medicines failed to cure her headaches and pain.

Test results turned up negative and doctors didn’t find anything wrong with Wiljen.

She was later diagnosed with meningitis and on her sixth day of confinement, Wiljen experienced convulsions and then went comatose.

Due to money constraints, Wiljen was transferred to the Intensive Care Unit (ICU) at the Cebu City Medical Center (CCMC) and after 14 days in coma, Wiljen died.

“While I look at my daughter in that condition, I really pitied her. We decided on our mind to let her go so that she could rest,” Alcontin said.

Based on her death certificate, Wiljen died due to tuberculosis, meningitis and sepsis secondary to pneumonia.

She was laid to rest last February 4 at the Municipal Cemetery in A. Lopez, Barangay Labangon.

Wiljen and her siblings were vaccinated with Dengvaxia on Aug. 12 last year and were among the 150,000 children in Cebu who received the vaccine.

Last December, Dengvaxia manufacturer Sanofi Pastuer admitted that those who were not infected with dengue prior to being vaccinated will experience more severe symptoms of the disease. A congressional inquiry is ongoing on the case.

Alcontin said her nephew posted her daughter’s story on Facebook and she was contacted by both the Public Attorney’s Office and the Volunteers Against Crime and Corruption (VACC).

“I’m afraid for my other kids who also received the vaccine. What if the same thing happens to them? That’s why we always monitor them, especially Wiljen’s twin sister who also got fever last week. I’m just thankful that she is now okay after taking medicine,” Alcontin said.

She said the Department of Health (DOH) and the city government failed to provide any meaningful assistance to them.

“They’ve just asked me about the condition of Wiljen, the food that she was eating and the source of our water,” Wiljen’s father Wilson said.

He said they already submitted surveillance reports to their central office and these are being processed by the National Epidemiology Center (NEC).
Bernadas said they will cooperate with any investigation into the deaths of the children.

“All initial findings or cause of deaths mentioned in these cases had been different from dengue/dengvaxia itself,” he said.