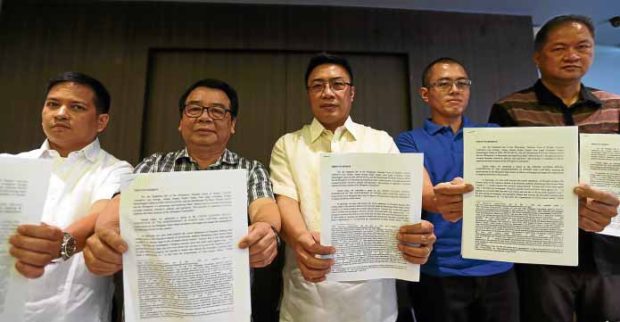 REPORT TO UNITED NATIONS Lawyers Arpee Santiago, Neri Colmenares, Ade Fajardo, Ryan Jay Roset and Tony La Viña show the report their groups submitted to the UNspecial rapporteur, narrating the recent government attacks on the judiciary that, they say, have a negative impact on the independence of judges and lawyers. —EDWIN BACASMAS

Groups led by the Integrated Bar of the Philippines (IBP) have asked the United Nations special rapporteur on the independence of judges and lawyers to look into the Duterte administration’s actions that undermine the judiciary and threaten the lives of lawyers.

The 16-page report filed on Wednesday appealed for “urgent action” on the part of UN Special Rapporteur Diego Garcia-Sayan, saying the administration’s infringing judicial independence “jeopardizes the very essence of democracy in the Philippines.”

The report cited President Rodrigo Duterte’s public tirades against Chief Justice Maria Lourdes Sereno and the administration’s two-pronged effort to unseat her through impeachment in Congress and a quo warranto petition in the Supreme Court.

It also pointed to the threats to the lives of lawyers who represent drug suspects and peasant groups.

“The inability of the State to prevent the apparent weakening and undermining of the judiciary gives rise to international responsibility, especially considering the pronouncements of the President relating to immediate ouster of [Chief Justice] Sereno and against the legal profession that performs their duties under its Code of Professional Responsibility,” the report said.

Commenting on the legal community’s move, presidential spokesperson Harry Roque denied that the executive department was attacking the judiciary or its independence.

Roque insisted that Malacañang was is not behind the moves to unseat Sereno, and played down the President’s tirades against the Chief Justice, saying these were just an expression of dislike because of her insinuations against the President.

According to Roque, the President had kept silent on the impeachment moves against Sereno for a long time, but the Chief Justice accused him of having a hand in the efforts to remove her from office.

In a press briefing, IBP national president Abdiel Dan Fajardo said the purpose of filing the report was “to relay to the United Nations the recent events in our country [that] we believe will impact negatively on the independence of judges and lawyers in the country.”

“It is our position that the judicial independence is fundamental to the protection of human rights, democracy and the rule of law,” he said.

“There is a direct relation between the weakening of safeguards for the judiciary and lawyers and the gravity and frequency of human rights violations,” he added.

Antonio La Viña of Manlaban said “an independent judiciary is essential” to solving the problem of the killings hounding the administration’s brutal war on drugs.

Colmenares said that should the UN special rapporteur conduct an investigation and report that the Philippines’ legal system had been put at risk, it would cast the country in a negative light before the international community.

AHCR executive director Arpee Santiago said the Duterte administration should be open to an investigation if it wants to be exonerated.

The report noted that the “long-winded attacks on judicial independence” has been going on for more than two years since “the Chief Justice dared resist an apparent intrusion into judicial power”—referring to President Duterte’s order to seven judges whom he had linked to the illegal drug trade to surrender.

It noted that lawyer Lorenzo Gadon, identified as president of the Pro-Duterte Constitutional Reformers to Federalism, filed the impeachment complaint “as if on cue,” a few weeks after Speaker Pantaleon Alvarez said Sereno was facing the prospect of ouster.

“The case of [Chief Justice] Sereno clearly shows that the Philippine State reneges on its obligation to ensure that the suspension or removal of a judicial officer must only be for cause (incapacity or behavior that renders them unfit to discharge their duties). The State also violates the right of a judge to be accorded fair treatment and hearing under an appropriate procedure,” the report said.

It stated that the administration’s actions against Sereno would “deter judges from asserting their judicial independence and exercising their freedom of expression.

The law groups also brought up the “harassment” of lawyers who criticize government policies and represent clients tagged as “dissenters” or “activists.”

It cited the example of NUPL-Negros secretary general Benjamin Ramos, who works with peasant and human rights groups. A police poster tagged him as one of the alleged communists whom the public should report.

This is “blatantly opposed” to Principle 18 of the Basic Principles on the Role of Lawyers, stating that lawyers “shall not be identified with their clients or their clients’ causes,” the report said.