Policeman gunned down by motorcycle-riding assailants 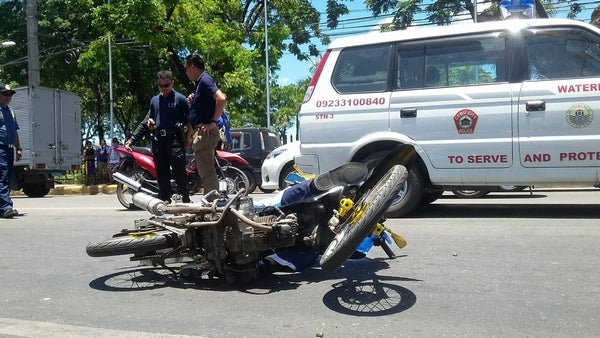 Police investigators at the place where PO1 Kenneth Pogoy was gunned down, recovered several empty shells of a .45-caliber pistol and that of a 9-mm gun. Pogoy’s assailants remain unidentified.

A policeman was shot by two motorcycle-riding men, while on his way home after testifying at a hearing at the Cebu Hall of Justice, Qimonda Bldg.

PO1 Kenneth Pogoy, 34, was driving his motorcycle going to his father’s house in Sitio Bato, Barangay Ermita, Cebu City, when, during a stop light at the intersection of M.J. Cuenco Ave. and Osmeña Blvd., near Plaza Independencia, a motorcycle stopped beside him and the backrider shot him several times.

Pogoy’s father, Samuel, an ex-cop, immediately rushed to the area upon learning of the incident. He asked police responders to bring his son to the hospital, where the latter was declared dead.

The younger Pogoy was assigned in Marawi City and was in Cebu to attend a hearing.

He was able to get back home at his father’s house in Sitio Bato, Barangay Ermita, Cebu City after appearing at a hearing in court at the Quimonda Building Tuesday morning.

SPO3 Rommel Bangcog of the Homicide Section of the Cebu City Police Office said another person, a certain Edward Hinampas, was also injured after being hit by a stray bullet on the right portion of his body.

Hinampas was reportedly also on board a motorcycle.

Crime investigators recovered nine empty shells and a slug of a 9-mm gun. There were also shells coming from a .45-caliber pistol recovered, which made investigators surmise that Pogo was able to fire back at his assailants.

Pogoy was in uniform as he came from a court hearing.

Bangcog said they have still to verify the case where Pogoy testified. Investigators have also been ordered to do a background check on the victim to determine why he was transferred to Mindanao.

His last assignment was Station 1 or the Parian Police Precinct before his transfer to Marawi City.

Meanwhile Supt. Ryan Devaras,chief of the Investigation and Detective Management Branch of the Cebu City Police Office said his investigators are still gathering data that would lead to the identification of Pogoy’s assailants.

Read Next
Fate of BRT project to be decided today