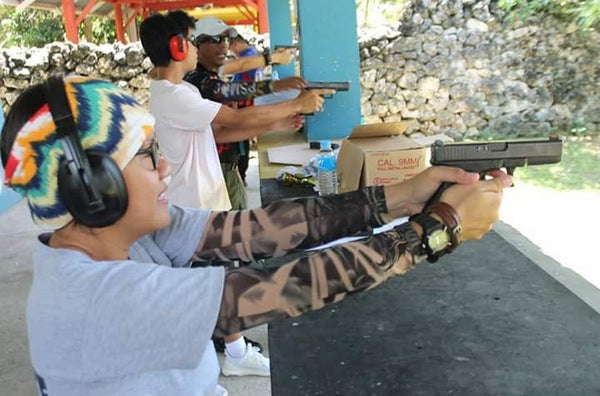 Participants are taught how to properly handle their guns during the shooting competition. / contributed photo

THE Lapu-Lapu City Police Office (LCPO) hosted a shooting competition for the members of the media from print, television and radio at Wonderland Firing Range in Barangay Agus, Lapu-Lapu City last May 19.

Prior to the competition, the participants were briefed by range officers led by Supt. Dexter Calacar of the City Mobile Police Force Unit on the proper way of handling guns like M16 rifle, semi-automatic shotgun and 9mm pistol.

LCPO Director Senior Supt. Romel Cabagnot told the participants that the orientation on firearms handling will help them understand the language and terminology used by the police.

“We also want the media to carry our message to the people about the efforts we are doing to maintain peace and order in Lapu-Lapu City. Despite the drug and personal-related killings executed by motor-riding in tandem, but rest assured the public is safe,” said Cabagnot.

In the female category, Crisle Adlawan of Bombo Radyo was declared Champion, followed by Mary Chris Servande of UNTV as first runner-up and Fe Marie Dumaboc of CCTN as second runner-up.

Each received a trophy.

The fellowship activity between the LCPO and the members of ARMALITE (Association of Reporters in Mandaue and Lapu-Lapu In Truth and Excellence) ended with a boodle fight lunch at the resort.