Smash-up due to reckless driving 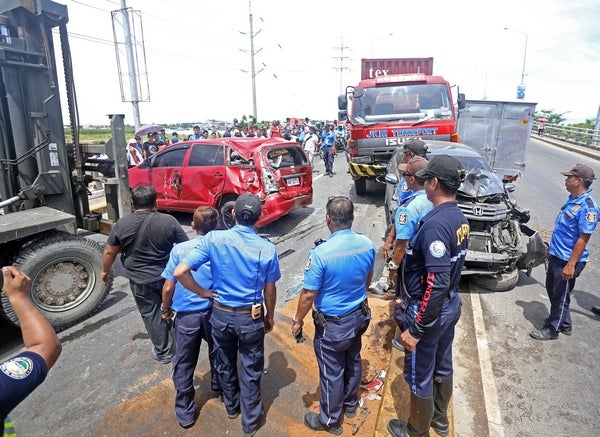 The 11-vehicle smashup that stalled traffic for almost three hours at the Marcelo Fernan Bridge on Monday morning, was not caused by defective brakes.

Instead, investigators from the Mandaue City Police Office (MCPO)-Traffic Group pinned the blame on the driver of the prime mover which plowed into ten other vehicles that resulted in the traffic gridlock that rendered the bridge unpassable.

The smashup happened at around 11 a.m.

Moniva added that the driver may have panicked when, after overtaking from the rightmost lane going to the inner lane, he realized that the lanes were already clogged and the brakes did not immediately respond.

Juan Escudero, 46, the driver of the prime mover which rammed into a delivery van, five private cars, an oil tanker and three taxi units on its front, said that there was no problem with the vehicle’s brakes until he reached Fernan Bridge.

The meeting was designed to come up with ways to prevent a similar incident from happening in the future.

And among the ways that they agreed on were: 1) to order trucks to use only the outer lanes, 2) prohibit trucks from overtaking while on the bridge and 3) there should be constant radio communication between DPWH-7 bridge maintenance personnel and the Traffic Enforcement Agency of Mandaue (TEAM) and the City Traffic Management Service (CTMS).

The group also agreed to immediately mount the “No overtaking” and “Heavy trucks should only use the outer lane” signages.

Also, a double, solid yellow line must be put on the Marcelo Fernan Bridge, to remind drivers that overtaking is not allowed.

Violators of the above-mentioned schemes will be punished, Tumulak said.

TAGS: due, reckless driving, Smash-up, to