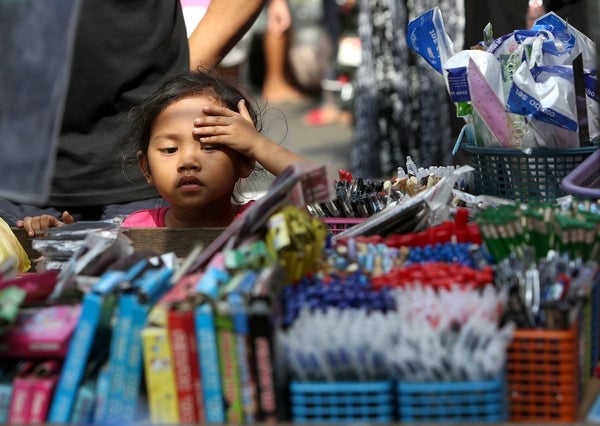 A child accompanied by her parents shop for school supplies at the Divisoria market in Manila ahead of today’s opening of classes in public schools. /Inquirer photo

He said the lack of classrooms is the main reason why the number of students per classroom could reach up to 60 in some schools.

“It’s big. Even if we compare our country to our neighbors, the number of students per class in the Philippines is relatively bigger,” he said in Filipino.

Tinio cited data from the Department of Education (DepEd) showing that the country still lacks about 18,000 rooms in Metro Manila alone.

He also explained that in the National Capital Region, the shortage of classrooms is due to lack of spaces for constructing more classrooms.

He underscored the need to build more classrooms to cater to the corresponding growth in student enrolment across the country,

According to Tinio, DepEd’s budget for schools was not used in full due to the sudden changes in requirements as well as new restrictions for construction.

He likewise noted the problem of government “underspending” in the past two years.