CIGARETTES FOR A MAN’S LIFE 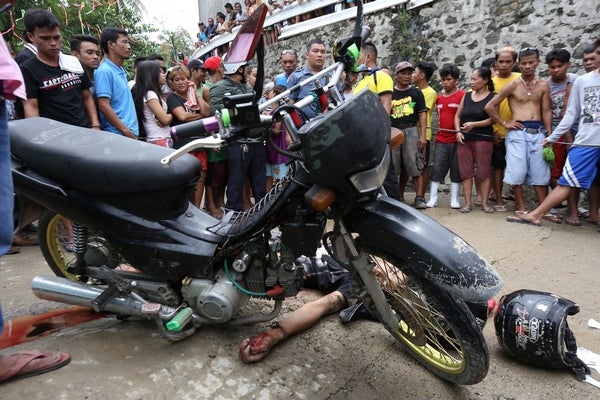 One of those shot, who was identified as Edilbert Edlisan, was killed while another one identified as Arnel Canduroy was wounded. CDN PHOTO / JUNJIE MENDOZA

Just two weeks ago, he was apprehended by jail officers for allegedly trying to sneak in packs of cigarettes into the Cebu City Jail.
He was forgiven.

But this time, it cost his life.

Edlisan was shot on the nape by a jail guard past 11 a.m. while trying to do “fishing,” a modus where inmates cast a nylon thread with a stone to their outside contacts who then tie up boxes of cigarettes and other contraband for the consumption of those behind bars.

He managed to escape aboard a motorcycle driven by a companion but eventually sprawled on the ground and died about 900 meters from the Cebu City Jail located on the hilly Barangay Kalunasan, Cebu City.

His companion, Arnel Canduroy, 23, suffered a gunshot wound on the left leg.

He was rushed by an emergency team to the hospital where he was arrested by the police. 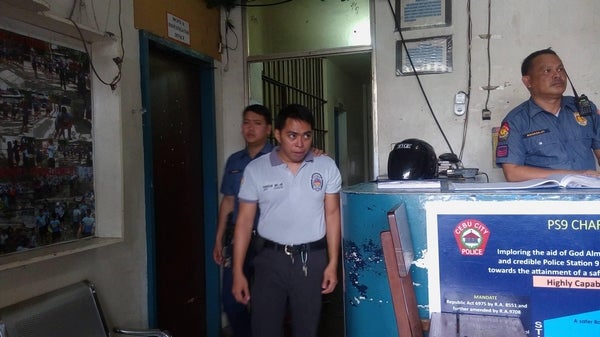 Jail Officer 1 Myron Garcia, a jail guard assigned to the Cebu City Jail, is detained at the Guadalupe Police Station detention cell after he surrendered for shooting two men on a motorcycle, who tried to sneak in packs of cigarettes into the Cebu City Jail in Barangay Kalunasan, Cebu City.

Senior Insp. Eduardo Sanchez, station commander of the Guadalupe Police Station, said they put Garcia under police custody but had yet to determine if they would file a case against the jail officer.

According to Sanchez, Garcia claimed that he was forced to shoot Edlisan after the latter pointed a gun at him.

But Sanchez said the police didn’t recover any firearm from the victim.

Officials of the Bureau of Jail Management and Penology in Central Visayas (BJMP-7) found outside the Cebu City Jail a box containing 10 boxes of cigarettes with a total of 100 packs, three lighters, a knife, a cellular phone and tin foils.

Jail Chief Supt. Arnold Buenacosa, director of the BJMP-Central Visayas, said Garcia was immediately relieved from his post pending resolution of the investigation being conducted by the office.

“In the meantime, he (Garcia) will be assigned at the BJMP-7 office and we will see if he violated any rules,” Buenacosa told Cebu Daily News.

Lawyer Arvin Odron, director of the Commission on Human Rights in Central Visayas (CHR-7), said they had stepped in to investigate the circumstances behind the incident.

He said he directed CHR-7 chief investigator Leo Villarino to lead in the probe.

“Being considered as the conscience of the government on issues related to human rights protection, the CHR needs to verify whether (or not) there is abuse in the use of firearms resulting to the death (of Edlisan),” said Odron in a text message to Cebu Daily News. 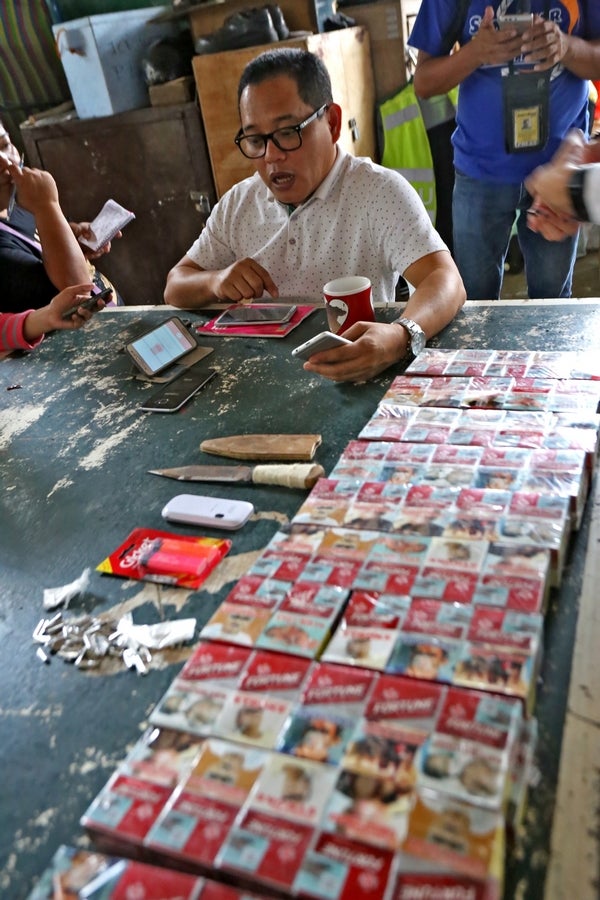 Cebu City Councilor Dave Tumulak, deputy mayor for peace and order, presents the packs of cigarettes, a knife and cellphones, and drug paraphernalia confiscated from the two men who tried to sneak the contraband into the Cebu City Jail on Tuesday. One of the men was shot dead by JO1 Myron Garcia while his alleged cohort was wounded.

Sought for comment, Garcia admitted shooting Edlisan and Canduroy but said he didn’t intend to kill them.

“Gitotokan ko sa usa nila sa armas. Wala koy intention nga patyon sila. Hindi ko nga alam na natamaan ko sila (One of them aimed a gun at me. I didn’t have any intention to kill them. I didn’t even know that they were hit),” he explained.

“Every day, tanghali, hapon, may threats kami (Every day, at noon, or afternoon, we received threats),” he said.

Supt. Renante Rubio, warden of the Cebu City Jail, said they were conducting a separate probe to find out who were the contacts of Edlisan and Canduroy inside the prison.

Two weeks ago, he said Edlisan was among those who were apprehended by jail guards for trying to sneak in packs of cigarettes inside the facility.

Edlisan was subsequently released, he added.

Rubio said cigarettes are prohibited inside the Cebu City Jail.

But he said some inmates managed to get supplies of cigarettes from people outside the facility.

Inmates subsequently sell cigarettes at P2,000 per pack or P100 per stick, he said.

“Cigarettes are not allowed here (jail) but some inmates would find ways to get supplies from outside,” Rubio said.

He said they were planning to organize the motorcycle-for-hire drivers in Kalunasan in an attempt to stop the entry of contraband inside the jail through the “fishing” method.

“Those involved in this kind of modus is carried out by men on board motorcycles. We want to organize the habal-habal drivers so we will be able to decipher who are involved in the legal and illegal trade,” Rubio said.

At present, the Cebu City Jail houses 5,020 inmates or more than the ideal capacity of 1,700 inmates.

Cebu City Councilor Dave Tumulak, deputy mayor on police matters, defended Garcia’s act in shooting Edlisan and Canduroy.
“It is man’s instinct to shoot someone who points a gun at him,” he said.

Tumulak urged those who continued to sneak in contraband inside the facility to stop the practice.

“Stop it or you’re putting your lives at risk,” he said.

“We thank our BJMP for taking custody of these 5,000 inmates. Imagine what problems this could bring us if these inmates bolt jail,” he added.

Read Next
‘Domeng’ to bring rains in north Cebu