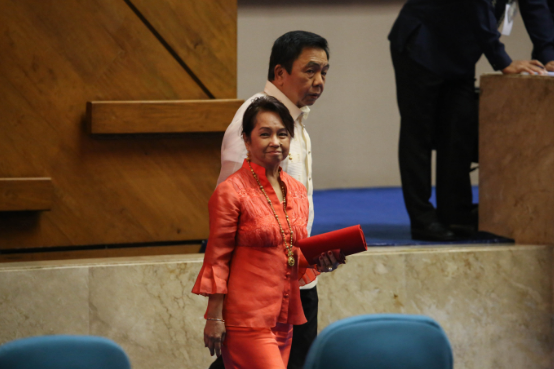 Former President Gloria Macapagal Arroyo arrives at the session hall of the House of Representatives before the opening of the third regular session of Congress on Monday. / Inquirer photo

In a surprise move on Monday, former president and now Pampanga Rep. Gloria Macapagal-Arroyo took her oath as new Speaker of the House of Representatives.

Minutes before President Rodrigo Duterte’s state of the nation address, Arroyo was seen taking over the rostrum.

She was later seen taking her oath before a lawmaker.

The microphone at the podium was notably turned off as Arroyo was taking her oath. She was also seen saying something to legislators before the oath-taking.

While Arroyo was at the podium, Pantaleon Alvarez was seen welcoming the President at the House.

Duterte was scheduled to deliver his state of the nation address at 4 p.m.