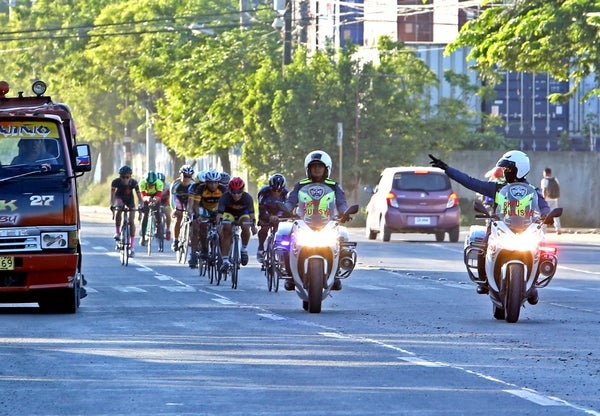 Some participants of the upcoming Regent Aguila Ironman 70.3 Asia Pacific Championships take part in the annual ride out yesterday which is now sponsored by Sun Life Financial. CDN PHOTO/LITO TECSON

Princess Galura, the general manager of Sunrise Events Inc., said that the crucial areas they have identified were the narrow roads from Maribago leading to the Mactan Newtown area.

“The crucial area is Maribago but for us, the entire route is crucial but we already pointed out these areas and with the help of the Lapu-Lapu City LGU and Mandaue City which is our new major partner for the race this year, we were able to address these concerns already like providing more marshals, police and traffic officers in the crucial areas and the entire route,” said Galura.

Also, she added that the Department of Public Works and Highways will start covering the potholes on the route early next week.

According to Galura, Sun Life’s Bike Out yesterday also helped participants familiarize the new route and that they have relayed to their fellow participants from outside Cebu and other countries which parts of the new bike route are crucial.

“As what I’ve gathered from the participants, overall it was good. Basically many participants who are new to the race as well as those who regularly participate every year said that the bike route is better than the previous races. Although we received very few negative feeds but as we all know, it’s a case to case basis when it comes to participants’ feedback, what’s important is that everything’s covered up and we are just waiting for the race day. Every year, there’s a different set of challenges we face on the organizing side but remarkably, we are able to address and solve it immediately because of the help of everyone involved in this race,” added Galura.

Some 400 participants of the upcoming race that features a 1.9-kilometer swim, 90-K bike and 21-K run took part in the Sun Life Bike Out that started and finished at the Mactan Newtown.

The purpose of the annual ride out which is held a week before the race is to familiarize the bike route especially for beginners of the Ironman 70.3 race.