Entrepreneur shares promise of treasures found in her attic 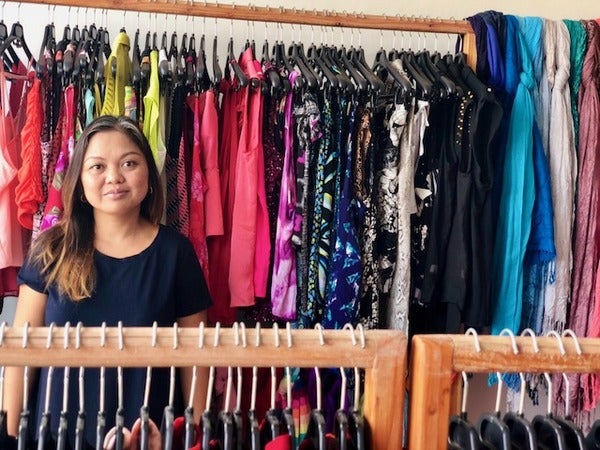 Former copy editor Dawny Tantuan has quit her online job to focus on her ukay-ukay business especially with the opening of her physical store called Attic Finds in Liloan town in northern Cebu.

You will always find treasures at the attic.”

This is the inspiration behind Attic Finds, a three-year-old clothing business of former copy editor, Dawny June Ebite Tantuan, in her husband’s hometown of Liloan, Cebu.

A native of the City of Canlaon in Negros Oriental, Tantuan was not a stranger to the retail business as her parents, Dutchie and Archie Ebite, both government employees, sold chorizo as a side income which helped defray household expenses.

Her move to Cebu came after 29 years of living and working in Negros. Although she graduated with a degree in Physical Therapy from Riverside Colleges in Bacolod, Tantuan worked as an English teacher because she was drawn to writing and reading books.

When she moved to Cebu in 2006, Tantuan worked for a self-publishing and on-demand printing services provider. She then worked as a copy editor for Cebu Daily News from 2010 to 2012.

Later, she found employment with with a US-based publishing company from 2012 to 2016 and then worked for an online company until April 2018.

Tantuan only joined Instagram in 2015 and was immediately drawn to the idea of cult following among online shoppers.

She saw the account of an online seller of knit clothing from Pampanga. After a few days on checking her Instagram account, Tantuan reached out to her to order one bale of knitted clothing.

A bale, normally called as ukay-ukay in the Philippines, is a large package of clothes from US, Japan and Korea which are bundled by factories in the Philippines and sold at a particular price. One bundle weighs 45 kilos.

“It was a risk that I had to take. I really don’t know what’s in there. All I can see is the beautiful knits of American branded clothing. I said ‘bahala na’. You won’t know the quality of clothing in one bale but it has a quote. For example, knitted wear. I was told it will arrive in a month,” she recalled.

She was disappointed when the bale arrived because some of the clothing pieces have runs and tears.

“I was not sure if I will get my investment back so I thought of bringing the clothes to the office. I was already selling hotdogs and sandwiches so why not sell clothes too?” she said.

She sold the knitted cardigans for P60 to P80 per piece She collected the payments on the 15th and 30th day of the month. She was able to earn a profit of P5,000 in two weeks after deducting all expenses.

These events happened in October 2015.

Her first time to sell ukay-ukay was a positive experience for Tantuan that she scoured the internet looking for suppliers.

She ordered another bale from the same lady who told her that she should open a Facebook account because she needs the online platform if she wants to do serious business.

“I did not want to share too much of myself out there so why would I make a Facebook account selling things when I am building walls personally? ” she said.

But the late delivery of her bale order in November pushed her to open a Facebook account which she named “Attic Finds.”

It has always been her dream to own a house with an attic.

She feels that treasures can be found in the attic.

“When you open a bale, you will really find treasures,” she shared.

In her personal Facebook account, she found a message dating to 2012 from a woman who asked her if she wants to resell ukay-ukay.

She reached out to her and bought another bale for P7,500.

Tantuan does not know the supplier but something inside told her it was a good decision. She immediately picked up the bale from the supplier’s warehouse in Jagobiao, Mandaue City.

There was no turning back from there. She was doing her online business while working full time for a company. Her online shop flourished with the strong following of online shoppers.

Tantuan makes it a point to upload photos of the clothes on particular time slots on weekends. But there came a point when she grew tired of just answering queries on social media.

“I like interacting with people interpersonally. You meet different people and along the way, you learn their stories. It’s really about meeting people and building relationships,” she said.

In May 2018, she opened the Attic Finds physical store located in Barangay Yati, Liloan after resigning from her job in April 2018.

In this store, her clients are mostly mothers, who wait on their children in nearby schools. There are families who visit the store on weekends.

Tantuan said she learned to be patient when she became an entrepreneur.

“I learned to be more compassionate and understand my customers’ circumstances,” she said.

In running her business, she gets pieces of advice from her suppliers and other sellers. She also learned to understand the nuances and techniques in running a clothing business. Visual merchandising is one of them.

“I learned to arrange the clothes by color so they are visually appealing. I learned by experience because if the clothes are not arranged well, the customers do not like going in the store,” she said.

Read Next
READY TO GO