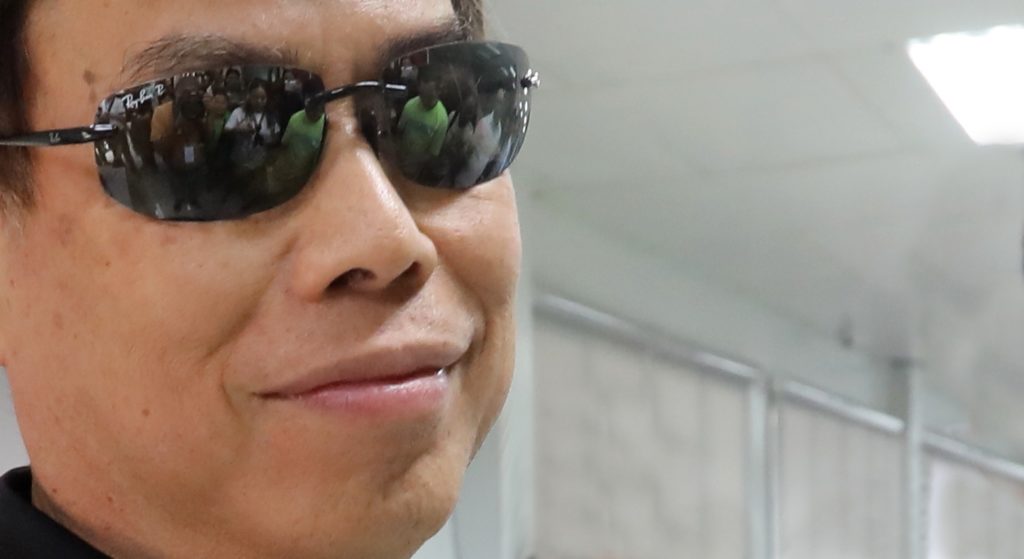 This was the appeal of law enforcers to Cebu businessman Peter Lim who is facing arrest over charges of “conspiracy to commit illegal drug trading.”

“We encourage him to voluntarily surrender. He is very much welcome to come here, and we promise to ensure his safety so he can answer the accusations against him in court,” he said in an interview on Thursday.

Police officers in Cebu on Thursday got hold of the official arrest warrant issued against Lim by Judge Gina Bibat-Palamos of the Regional Trial Court Branch 65 in Makati City.

Dumangeng, however, said they remained clueless as to the whereabouts of the controversial Cebuano businessman.

“Hinahanap natin siya (We’re looking for him). The warrant is there, and we will perform our duty,” he said.

“If he comes forward to surrender, that is better. We don’t want any violent incident to take place as we try to take custody of him,” he added.

Still in the country?

Lim’s spokesperson Dioscoro “Jun” Fuentes maintained that he has lost contact with his boss since last month.

But he surmised that Lim is just in Cebu or other parts of the country.

“I tell you, he could not leave the country because he surrendered his passport to the National Bureau of Investigation in Manila,” Fuentes told Cebu Daily News.

“How could he travel abroad without a passport?,” he added.

Lim appeared before the NBI to clear his name in July 2016 shortly after he met with President Rodrigo Duterte and expressed his intent to be investigated following reports that he’s among the country’s big-time drug lords.

Former Rep. Antonio Cuenco of Cebu City’s south district, who chaired the House committee on dangerous drugs when a congressional inquiry was conducted in 2002 over the alleged big-time drug operation of Lim and his brother Wellington, said the businessman’s indictment was a vindication of an earlier report of his committee that found sufficient evidence against Peter and Wellington.

“There was probable cause against them. We, in Congress, forwarded the report to the Department of Justice (DOJ) but sadly, they did not act on it. All along, nobody cared and there must be a reason why the government back then did not act on it,” he lamented.

Cuenco said he was hoping that the case against Lim will prosper this time.

“Lim’s indictment affirmed our committee reports. The President, the National Bureau of Investigation, and the DOJ are now doing their best. Let’s wait for the outcome,” he told Cebu Daily News.

“Will this case prosper? We don’t know. I hope it does. Hinaot pa unta tinud-on gyud sa gobyerno (I hope the government will be serious in going after Lim),” he added.

Where is Peter Lim?

But like any other person accused of a crime, Cuenco said Lim is entitled to due process.

“Peter Lim has the right to defend himself. Let us not deny him that. At this stage, I won’t condemn him. I will not say he’s guilty nor will I say he’s innocent. I have no right to say those things. It’s up to the court to decide. Let justice takes its course,” the lawmaker said.

Cuenco, the primary author of Republic Act 9165 or the Comprehensive Dangerous Drugs Act of 2002, hoped Lim would surrender and answer the accusations hurled against him.

“He must face the case. If his conscience is clear, he must surrender. The 64 thousand dollar question, however, now is: Where is Peter Lim,” he said.

Senior Insp. Dindo Alaras, commander of the Mabolo Police Station, said he already has a team to serve the arrest warrant against Lim, whose last given address was at No. 12 Tres Borces Extension in Barangay Mabolo, Cebu City.

“I think he already knows what to do. If he surrenders, that’s good,” he said.

Lawyer Inocencio de la Cerna Jr., consultant of the Criminal Investigation and Detection Group in Central Visayas, said law enforcers don’t need to have a copy of the arrest warrant to arrest Lim.

“If a policeman or any law enforcer happens to meet Lim, he or she can arrest the accused and just present the arrest warrant later on since it’s already known that the court ordered his arrest,” he explained.

De la Cerna said law enforcers can go to Lim’s last known address and inquire if he is there.

“Our operatives, however, cannot enter Lim’s house unless they get the permission from the owner. Without it, they can only ask someone from the house if the subject is there,” he said.

“If the owner allows law enforcers to come in, then good. Otherwise, we could not force them. The owner of the house has the right to refuse any entry by the law enforcers,” he added.

A panel of prosecutors last Friday recommended the filing of charges against Lim for violating Republic Act 9165 or the Comprehensive Dangerous Drugs Act of 2002, particularly for “selling, trading, administration, dispensation, delivery, distribution and transportation of any dangerous drug.”

The DOJ used as a basis the testimony of self-confessed drug lord Rolando “Kerwin” Espinosa Jr. before the Senate where Lim was identified as one of his suppliers of dangerous drugs.

President Duterte publicly called out Lim in 2016, alleging that he was one of the biggest drug dealers in the country. /Gerard Vincent Francisco, USJ-R intern