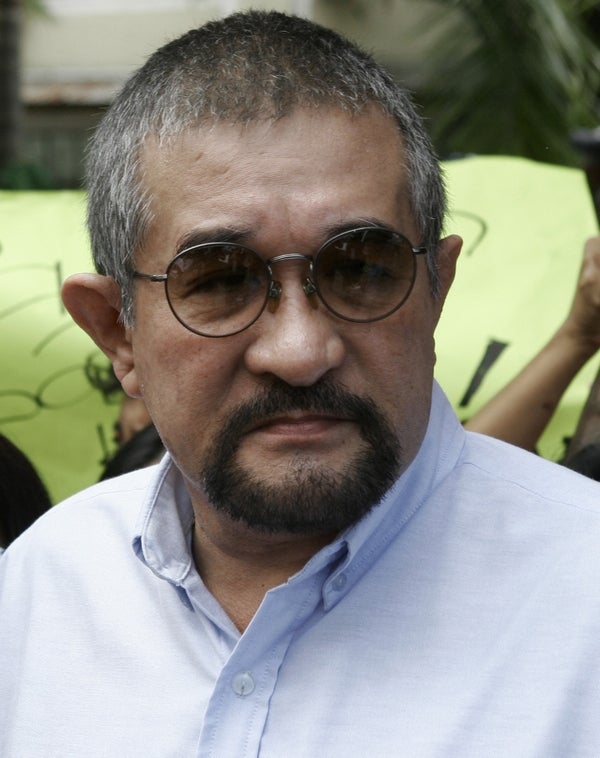 Words of condolence and sympathy poured in as former Cebu Governor Vicente “Tingting” de la Serna passed away on Saturday.

The former politician, known to many as the “Champion of the Masses,” succumbed to lung cancer at 12:05 a.m. inside his residence in Sto. Niño Village in Barangay Banilad, Cebu City, on Saturday.

“It was a peaceful death,” said his daughter, Dr. Frances de la Serna, in a media interview.

The former governor’s body will be cremated and buried today, September 2, following a Mass at the Cebu Memorial Park in Barangay Banilad, Cebu City, at 7 a.m.

Frances said it was her father’s wish to lay him to rest within 24 hours after his death and to forego any embalming procedure.

De la Serna was survived by his older brother Manolo, as well as his three daughters — twins Marie and Carrie and Frances — and son Manu.

Frances said her father was diagnosed with lung cancer in September 2017 and thereafter underwent chemotherapy.

De la Serna opted to spend his last days in his residence in Sto. Niño Village, where his one-day wake was also held.

The family had initially wanted to keep the wake and burial private but because of the numerous requests from the people to pay him their last respect, the family decided to open both his wake and burial to the public.

“He was a close family friend. We’ve always known him to be someone who has a vision, a brave man, and a champion of the masses,” he said in an interview.

Daluz’s mother, the late radio personality and anti-Marcos icon Nenita “Inday Nita” Cortes-Daluz, was a close friend of De la Serna. The two were among prominent Cebuano activists and street parliamentarians who fought the dictator, president Ferdinand Marcos, in the 1980s.

“They stood up against the Marcoses, and Tingting will surely be missed,” he said.

Man of the masses

But among De la Serna’s legacy, Daluz said, nothing beat how the former governor paved the way for the realization of the 93-1 lot swap agreement that allowed the Cebu City government and the provincial government to sign a deal to trade city-owned properties for these province-owned lots occupied by the city’s urban poor.

International boxing judge Edward Ligas said De la Serna would always be remembered as a person who associated himself with common people.

“He was the man of the masses. Despite the temptations, he remained an honest government official. I’m saddened by his death,” he said.

De la Serna was appointed officer in charge vice mayor of Mandaue City after the People Power Revolution that toppled the Marcos regime in 1986.

He later served as congressman of Cebu’s sixth district before he was elected Cebu governor in 1992.

Lawyer Democrito Barcenas, former officer in charge vice governor of Cebu, said De la Serna was a simple man who used to personally drive his motorcycle from his residence in Mandaue City to the Capitol and back.

“What impressed me most was his sincerity to his friends and his steadfast adherence to principles as a public servant. He was not a traditional politician. He never abandoned his party’s platform and principles which were pro-people,” he said in a statement sent to Cebu Daily News.

“Tingting de la Serna’s death is not only a personal loss to me but also to countless Cebuanos whom he served faithfully as governor of Cebu in the early 90’s. His death diminishes us all,” he added.

A mentor, a friend

“I first ran as board member in 1992, and he was my governor at that time. I learned so much from him,” she said.

“It’s our joy that he (De la Serna) served the province of Cebu,” she said.

“He was an honest leader and was not involved in any controversy. He’s a big loss to the people of Cebu,” he said.

Paredes expressed hope that current leaders would emulate the virtues and brand of leadership showed by De la Serna.

“He ate with his aides and his closeness to the people was notable. It’s sad that a person like him is gone. The poor lost a supporter,” he said.

Veteran lawyer Rex Fernandez, a friend of De la Serna, wrote a poem about the former governor, expressing his grief over the loss of a friend.

“Yesterday, I was thinking of you. And I thought of visiting you. But your wish for me not to see. Your tears held me back. I woke up around past 12 a.m. This morning and I thought. How you were doing after,” read Fernandez’s poem entitled Goodbye, Vicente.

“I woke again around seven and I read the messages and found. One saying, ‘Papa’s gone.’ And I felt a deep sadness envelop and surround me. And I held up the tears welling. Deep, really deep inside me. I felt so alone, so lonely that my wife’s call of comfort from afar, made it lonelier.”

“The sorrow and the sadness, the loneliness, feel eternal. For our friendship was eternal. Goodbye, Vicente.”

Read Next
Palma rebukes Duterte for equating beauty with rape