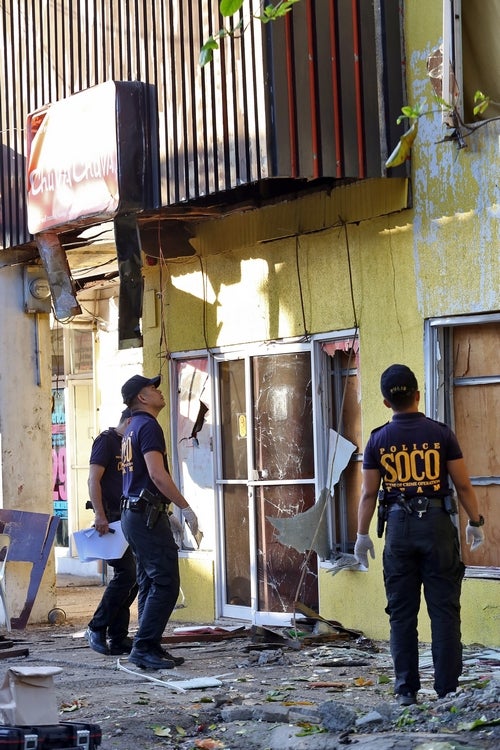 Scene of the Crime (Soco) operatives personnel investigate the damage caused by the explosion of an improvised explosive device thrown in front of Chuva Chuva massage parlor believed to be owned by the controversial businessman Peter Lim.

While police believe the establishment is owned by Lim, they however admitted that there were no business documents found inside the massage parlor.

The explosion damaged the ceiling and the glass wall of the establishment.

Just a few minutes later, the Fuente Police Station received a call from one of the security guards of Infinity KTV and Music Lounge who reported that two men riding a motorcycle threw an IED at the parking lot.

But the IED did not explode.

Supt. Ryan Devaras, chief of the Investigation, Detection and Management Branch (IDMB) of the Cebu City Police Office said employees of both business establishments described the perpetrators as men wearing masks and riding a motorcycle.

“It is still premature to tell if the two incidents are related,” said Devaras.

He said they are still verifying the ownership of the massage parlor.

(We coordinated with the establishment but we have not found any business permit. So the owner of the massage parlor is still unidentified.)

But Devaras admitted receiving reports that Lim owns the establishment.

“Allegedly he is the owner of the massage parlor. But we cannot conclude it yet because we do not have any evidence,” he added.

In a separate interview, Chief Insp. John Abreu, chief of Explosives Ordnance Device (EOD) of the Police Regional Office in Central Visayas (PRO-7), said the IED found at the Infinity KTV and Music Lounge has the same components used for dynamite fishing.

“It is used for illegal fishing. It only have a low range of damage,” said Abreu.

He said that the IED found at the Infinity on Saturday has the same components as the IED which exploded at Hilton Motors, which is owned also by Lim, last July.

“We saw similarities (of the IED found in Infinity and the one exploded at Hilton). They have the same ignitor being used,” he added.

But Abreu said that they cannot determine if the IED exploded at massage parlor is the same with the Infinity and Hilton Motors since the pieces of the IED are still at the Crime Laboratory.

The incidents bring to four the apparent attack against establishments linked or owned by Lim and his brother Wellington.

No one was hurt but the explosion tore apart some vehicles displayed outside Hilton Motors, which sells imported heavy equipment and trucks.

The armed men poured gasoline near the entrance but employees, who brought fire extinguishers were able to stop the arson attempt and the armed men fled on board a van.

Before that, in March this year, unidentified men fired at a vehicle reportedly driven by Wellington as he was leaving the Infinity car park.

Wellington was unharmed but security guard Wilson Bucag, 42, who was guiding Wellington’s car out of the parking lot, was killed after sustaining multiple gunshot wounds on the body.

Another security guard was wounded, as well as two foreigners who happened to pass by during the shooting.

Cebu City Councilor Dave Tumulak urged the public to always stay vigilant and immediately report to the authorities any suspicious activities in their surroundings.

“Well, we request them to be more vigilant, and assist our law enforcement by reporting any unusual activities to the nearest barangay or police station. We have to be security conscious in order not to create fear and panic,” he added.

Tumulak said local governments and law enforcers should cooperate with each other.

“This is high time for our PNP (Philippine National Police) and LGU (local government unit) to work hand-in-hand,” added Tumulak.