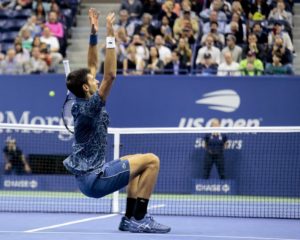 Novak Djokovic celebrates after winning over Juan Martin del Potro in the men’s finals of the US Open tennis tournament in New York.
ap

NEW YORK — The U.S. Open final suddenly appeared to be slipping away from Novak Djokovic. He dropped three consecutive games. He was barking at himself, at his entourage, at a crowd vocally supporting his opponent, Juan Martin del Potro. He was, in short, out of sorts.

And then came Sunday’s pivotal game, a 20-minute, 22-point epic. Three times, del Potro was a point from breaking and earning the right to serve to make it a set apiece. Three times, Djokovic steeled himself. Eventually, he seized that game — and del Potro’s best chance to make a match of it.

A year after missing the U.S. Open because of an injured right elbow that would require surgery, Djokovic showed that he is unquestionably back at his best and back at the top of tennis. His returns and defense-to-offense skills as impeccable as ever, Djokovic collected his 14th Grand Slam title and second in a row by getting through every crucial moment for a 6-3, 7-6 (4), 6-3 victory over 2009 champion del Potro at Flushing Meadows.

“There was always part of me that imagined and believed and hoped that I can get back (to) the desired level of tennis very soon,” said Djokovic, whose operation was in February. “But at the same time, life showed me that it takes time for good things, it takes time to really build them, for things to fall into place, so you can center yourself, balance yourself and thrive. The last two months have been terrific.”

This was Djokovic’s third championship in New York, along with those in 2011 and 2015. Add in the trophies he has earned at six Australian Opens, one French Open and four Wimbledons, most recently in July, and the 31-year-old Serb pulled even with Pete Sampras for the third-most majors among men, trailing only Roger Federer’s 20 and Rafael Nadal’s 17.

Federer lost in the fourth round in New York, while Nadal retired from his semifinal against del Potro because of a bad right knee. That put the 29-year-old Argentine back in a Grand Slam final for the first time since his breakthrough nine years ago, a comeback for a guy who had four wrist operations in the interim.

“I believe he’ll be here again with the champion’s trophy. I really do,” said Djokovic, who gave his pal a hug at the net, and then went over to console del Potro as he wiped away tears at his sideline seat.