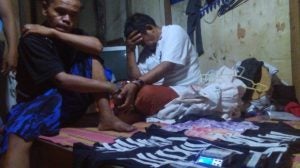 Arrested in the buy-bust operation were Ronnie Peñalosa, 43; and Arnold Abadilla, 51, both residents of A. Lopez Street, Barangay Calamba.

Peñalosa was the target of the drug operation.

Seized from him were suspected shabu with an estimated worth of P68,750.

Peñalosa admitted that he is involved in selling drugs but denied owning the shabu found in his possession.

The arrested persons are now detained at the jail facility of Parian police station.