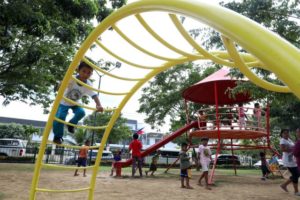 HELP students start a new life by providing them with àn avenue to continue studying.

Department of Education (DepEd)–Naga City Schools Division Superintendent Dr. Gregorio Cyrus Elejorde appealed to the public to also donate school materials to the more than 600 students who were displaced by the massive landslide in Barangay Tinaan, Naga City.

“Our relief campaigns are concentrated to the education needs of our children like notebook, paper. We are focusing on that because it has not been given enough attention,” said Elejorde.

DepEd-Naga City has so far collected around P140,000 that was donated by the different schools divisions in the region, he revealed.

“We are targeting (supplies for) more than 600 students. We will be providing them 10 notebooks, paper, ballpen and pencil, which we’ve estimated to cost at around P200,000,” Elejorde added.

Aside from this, the Association of Superintendent in DepEd Central Visayas is also organizing psychosocial activities to parents and children to help them recover from the trauma that they’ve experienced due to the tragedy.

“In order to keep parents busy as well, we’ve organized a health and livelihood education activity, as way of supporting the community while attending to the needs of the students,” he said.

Elejorde said that parent evacuees were advised to participate in the activity so that they would eventually leave the evacuation center and allow the classrooms to be used again by the teachers and students for their classes.

The other schools resumed their classes last Monday, Sept. 24 even as the evacuees were allowed to remain within the school premises.

“But by Monday (Oct. 1), the (remaining schools) are already expected to resume their classes. Right now, they are just scheduling and organizing their activities in coordination with the parents and the Department of Social Welfare and Development (DSWD),” Elejorde added.

The schools that have evacuees are using the “Two SuDs” approach, or by limiting the classes to only two subjects the whole day.

Elejorde said the approach enabled them to minimize the movement of the students by lessening the trasfer of classrooms and the exchange of teachers.

Elejorde said they have the learning materials that corresponded to the Two SuDs instructional approach.

“[By holding classes], we are trying to prevent further damages on the victims, which may happen if they are left without education,” Elejorde said.

Meanwhile, children who were evacuated to the Enan Chiong Activity Center were also sent by DepEd to the nearest schools so that they could continue their studies.

“We’ve also augmented the sets of teachers from other schools to handle these group of students,” he said.

On the other hand, classes at the Mainit Integrated School (MIS), which has around 800 student population from elementary to high school, remained suspended because it is situated within the one-kilometer radius from the ground zero of the landslide.

The teachers in MIS were deployed to the schools nearest to the evacuation centers, Elejorde said.