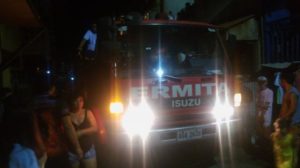 The fire that affected a residence in Sitio Ermita Proper, Barangay Ermita, Cebu City at past 11 p.m. was extinguished in four minutes, thanks to a quick thinking neighbor who rushed in with a fire extinguisher.

Fire Officer (FO3) Niel Daculan, duty investigator of the Cebu City Fire Department, said they received the fire alarm at 11:08 p.m. and a neighbor who was armed with a fire extinguisher was able to put it out by 11:12 p.m.

The house, made of light meterials and owned by a certain Carmen, only sustained minor damage.

A fire truck from Barangay Ermita rushed to the area but the fire was already out by the time they arrived. Other fire trucks from CCFD were then advised go back to their respective stations, said Daculan.