END OF THE LINE 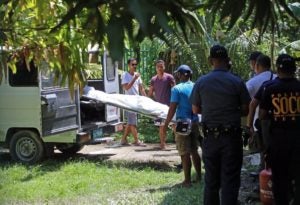 He withdrew to a secluded place in Sibonga town, Cebu where he thought he would be safe after he was publicly identified by the Philippine Drug Enforcement Agency (PDEA) as among the country’s narco politicians.

But Marc Ferdinand Bas was cornered inside his room and was peppered with bullets in the upper body by still unidentified assailants.

His body was found sprawling on the floor on Monday morning when his live-in partner went back to the house at Sitio Dumlog, Barangay Simala, Sibonga.

Just like the other killings involving drug suspects, the police were quick to point at the purported squabble among players in the illegal drug trade as possible motive in the killing.

His family begged off from issuing any statement, appealing to members of the press to respect their privacy.

Bas, 42, former barangay captain of Lagtang in Talisay City, was linked by PDEA to illegal drugs. He was out on bail for charges of illegal possession of firearms and explosives.

His murder came less than three months after his son, Art Stephen Bas, 23, was gunned down in an ambush last July 20.

There were reports that the killing of Art was a case of mistaken identity since the young man, who was just elected as barangay councilor of Lagtang, was driving a heavily tinted vehicle that used to be driven by his father.

After the ambush, the assailant opened the door of the driver’s side to check on the victim before speeding off.

Not a single suspect had been arrested for the slay of Art.

But even before his son was killed, Bas had already retreated to Sibonga, about 44 km away from Talisay, and rented a house, about 200 meters away from the highway.

The caretaker of the house, who asked not to be named, said the former village official had been renting the house owned by Jun Billones since July 5, about two months after he was identified as among the 207 barangay officials in the country who were “involved in illegal drug activities.”

She said she noticed Bas was always inside his room.

The caretaker, who asked not to be named, said only three people kept on visiting the former barangay captain – his cousin, live-in partner and an errand boy who would buy his food and other things for him.

But whoever was looking for him got wind of his whereabouts.

About 11 p.m. on Sunday, the caretaker said at least three unidentified men barged into the house.

(I noticed that they destroyed the door of the house. I got scared. My child and I crouched on the floor).

What followed an hour later were bursts of gunfire, she added. The assailants then left on board a four-wheel vehicle.

SPO4 Darline Banogon, deputy chief of the Sibonga police station, said they received a shooting alarm past 1 a.m. from concerned citizens but no one could pinpoint the location where the bursts of gunfire came from.

About 5 a.m. on Monday, his cousin and his live-in-partner found Bas’ body sprawling on the floor inside his room on the house’s second floor.

Chief Supt. Debold Sinas, director of the Central Visayas police, said they were looking into illegal drugs and politics as the possible motives behind the killing of Bas.

Banogon said they were coordinating with the Talisay City Police Station in an attempt to identify the assailants and the mastermind.

“Wala mi kahibaw nga anaa nana siya dinha (We did not know that he was already residing in Sibonga until he was killed),” said Banogon.

According to the Scene of the Crime Operatives (Soco) team who processed the crime scene, Bas suffered multiple gunshot wounds on his upper body.

“Basehan ang daghang samad pinusilan, makaingon ta grabe ang kalagot ang nga suspects. (Based on the number of gunshot wounds, it would say that the assailants had so much hatred for the victim),” said Banogon.

Bas was arrested by Talisay City Police in April 2017 for alleged illegal possession of firearms and explosives.

Read Next
Sinas: Media can write whatever they want