One dead, five injured as truck falls off cliff 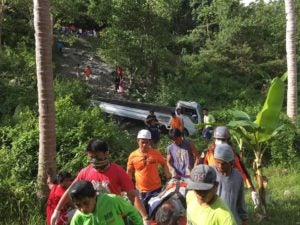 Police authorities recorded at least one fatality after a truck fell off a cliff in Argao town, southern Cebu on Friday morning (October 12).

Five other passengers, who were on board the same truck, sustained injuries.

The truck was loaded with cement.