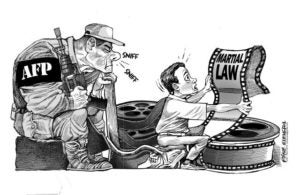 If any real “Red October” plot was uncovered this month, it was a version of charter change approved by House Speaker Gloria Macapagal-Arroyo and some of her congressional colleagues that exposed the extent of anticipation of a presidential vacancy among President Rodrigo Duterete’s own allies.

Under the Arroyo version of charter change (hurriedly amended to restore the vice president to the presidential line of succession), the Senate President was designated as immediate successor to the President in case he was incapacitated or vacated his office.

This fueled speculation that Arroyo found the end of a Duterte term imminent and was plotting to return to the highest office in the land by gunning for the Senate and securing its leadership to position herself for a second takeover of the presidency.

The other Duterte supporter who looks eager to be President is of course Ferdinand Marcos Jr., whose protest of loss to Vice President Ma. Leonor Robredo is still being heard by the Presidential Electoral Tribunal.

That is the Marcos who is Duterte’s preferred successor should he come to the point of resigning.

The real “Red October” is a scheme against the vice presidency (fired by excited fantasies of a Duterte exit), not against the President as the police and the military claimed infamously, complete with an unverified list of schools allegedly serving as New People’s Army (NPA) recruitment hubs.

According to the military leadership, the screening of films about martial law and the dictator Ferdinand Marcos in the 18 schools is evidence that they are instigating students to rebel and help overthrow Duterte who is being portrayed as the new Marcos.

If this were the case, then schools and communities across the country have been recruiting for the Communist Party of the Philippines and the NPA since the latter half of the 1980s and the Apo Hiking Society should be charged with rebellion over that “Handog ng Pilipino sa Mundo” music video that shows the depth and strength of Filipino opposition to the Marcos dictatorship and oligarchy.

It was only right that school leaders, artists, students, teachers and other educators condemned the unfounded association of educational institutions with subversion.

“Our film screenings provide an invaluable service to the youth, the students and the general audience, especially since our education system has largely failed in informing them about the systemic atrocities that happened during the martial law era,” read one statement condemning the red scare.

“The screenings hope to provide them with knowledge and insight into that dark chapter in our history, especially since many of the actual perpetrators and beneficiaries of that fascist dictatorship have fully rehabilitated themselves back into mainstream politics and into positions of power.”

The real “Red October” is not the enlightenment of students’ gaps in historical learning, but the plot among the president’s closest allies to subvert our constitutional order as they feed their addiction to power.

War against hegemons, anyone?