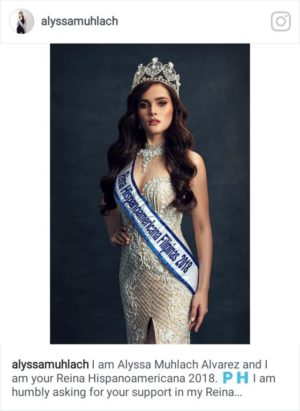 Alvarez told Cebu Daily News that she has only 12 days to prepare for the pageant.

“I trained with my camp, Kagandahang Flores, for my pasarela and question and answer,” she said.

She also collaborated with designers to work for her national costume and evening gown.

The 22-year-old beauty queen revealed that she has to learn the Hispanic culture and Spanish language.

Reina Hispanomaericana 2018 is a pageant organized by Promociones Gloria.

It started in 1991 and promotes Hispanic heritage, language, and culture.

In 2017, Philippines got its first crown after Kapuso actress Teresita Ssen “Winwyn” Marquez won the title.

How does she deal with the pressure to bring home the crown just like what Marquez did?

“I am taking it as a motivation and as a challenge to myself but I believe I can do it with God by my side,” she told CDN.

Alvarez will be competing with 29 other candidates for Reina Hispanoamericana 2018.

The beauty queen comes from a show business clan but decided to take another path.

“I decided to join a beauty pageant because I learned that it can be used as a platform for the advocacy that I believe in or a cause that I support. It truly is more than just being beautiful on the outside. It is more of helping other people and meeting people from different backgrounds who strive to make the world a better place,” she told CDN.