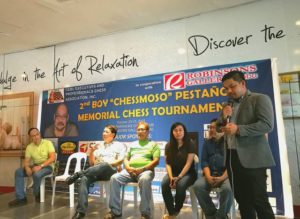 THE NUMBER of participating teams in the second Boy “Chessmoso” Pestaño Memorial Open Chess Team Tournament which is ongoing at the Barracks Chess Club in Robinsons Galleria Cebu, exceeded the targeted number that organizers were expecting.

Cebu Executives and Professionals Chess Association (Cepca) president, Engr. Jerry Maratas, proudly said this after a total of 30 teams composed of three wood pushers each are currently vying in the nine-round Swiss system format competition sanctioned by the National Chess Federation of the Philippines (NCFP).

Cepca and Maratas were only expecting 20 teams but in yesterday’s kickoff, an additional 10 teams registered at the last minute.

The champion will get P25,000 and a trophy while the runner-up to the 10th placers will also get cash prizes.

The three top board players will also receive P1,000 each.

“This is a record setting feat for us considering that we only expected fewer teams because this is the first time that we organized a team tournament. Last year, we organized an individual tournament, so it was very surprising and we are very happy at the same time because of the huge turnout,” said Maratas.

The annual tournament was named after the late Francisco “Boy” Pestaño, one of Cepca’s founding members, and this will also serve as Cepca’s 28th anniversary celebration.

Teams from different schools, towns, cities and barangays will showcase their wood pushing prowess in the two-day tournament which serves a double purpose for Cepca.

“This tournament also serves as the biggest one we organize each year so a lot of people in the chess community are looking forward to it. This is not just the activity we did in our anniversary, in fact we went to Carmen, Cebu, and donated chess sets there. We also encouraged a lot of our youth especially the kids to join our tournaments as part of our grassroots program and our last major tournament will be in December for the Cepca Grand Finals where the monthly champions will compete,” added Maratas.

Out-of-town teams from Bohol and Negros Island are currently vying against Cebu-based teams as the first five rounds were played as of press time yesterday.

The tournament, which is a team competition, features a three-man team that has a 2000 point NCFP rating.

NCFP, the governing body of chess in the Philippines, also gave non-rated players an instant 1800 points so they could join the tournament.

The awarding ceremonies of the winning teams will be announced tonight.