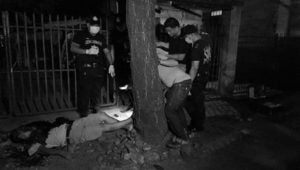 A motorcycle-riding gunman shot dead on Monday (Oct. 22) a 55-year-old man, whom police described as a man recently released from jail after he posted bail, in Barangay Alang-Alang in Mandaue City.

Danilo Olaivar, a resident of the barangay, died after he was shot several times in the body by an unidentified assailant at past 5 p.m., said SPO3 Gregorio Cabezares of the Mandaue Police Station 1 during an interview.

Cabezares said that initial investigation showed that Olaivar was standing outside the gate of his residence when two men on a motorcycle stopped nearby with the backrider pulling out a gun and shooting the victim several times.

Cabezares said that when the victim fell, the shooter got off the motorcycle and finished the victim with more shots to the body.

The police officer also said that Scene of the Crime Operatives also recovered five empty shells of a still unidentified handgun at the crime scene, and 24 sachets of suspected shabu and cash allegedly from the pockets of the dead victim.