Putin warns of a new ‘arms race’ with America 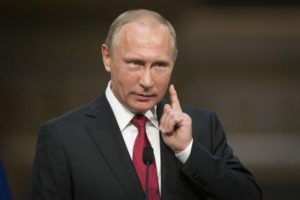 MOSCOW, Russia – President Vladimir Putin warned Wednesday of a new arms race if America pulls out of weapons treaties, and said Russia would respond “in kind” to any new US missiles placed on European soil.

At the weekend, US President Donald Trump sparked concerns globally when he said he would ditch a key Cold War-era nuclear weapons pact, the three-decade-old Intermediate-Range Nuclear Forces Treaty (INF).

Speaking after hosting Trump’s national security advisor John Bolton on Tuesday, Putin warned that abandoning the treaty, and failure to extend another key arms control agreement known as the New START, would unleash a new arms race and put Europe in danger.

Putin said dismantling a global arms control system was “very dangerous,” adding Russia was concerned about the fact that the United States had already abandoned the Anti-Ballistic Missile treaty, planned to ditch the INF, and that the future of the New START was unclear.

“There would be nothing left except an arms race,” he said at a news conference after talks with Italian Prime Minister Giuseppe Conte.

The Russian president said that if Washington moved to abandon the INF and placed more missiles in Europe, Russia would respond “in kind.”

“Will we be able to respond?” he said. “Yes, we will and this will be very quick and effective.”

Putin said any European countries agreeing to host US missiles would be at risk of a Russian attack.

“These are obvious things,” the Russian leader said.

Read Next
DOTr to open PH’s first ‘landport’ in November