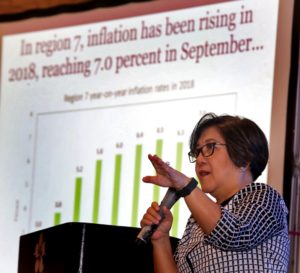 GOVERNMENT officials are pushing for rice tariffication as a bid to help temper the country’s high inflation rate.

Department of Trade and Industry in Central Visayas (DTI-7) Regional Director Asteria Caberte said that it is important to address the high cost of rice which is one of the major contributors to the country’s inflation.

“Based on estimates by the central bank, allowing cheap rice imports with tariffs will immediately lower the inflation rate by 0.4 percentage points,” she explained.

The Duterte administration wants to amend the two decade-old Agricultural Tariffication Act of 1996. The amendments will pave the way for the lifting of quantitative restrictions that have allowed Philippine authorities to limit the volume of rice imports ever year.

Aside from lowering inflation, Caberte said another potential impact of more rice imports is that prices of rice can fall between P2 to P7 per kilo.

Caberte said that the rice tariffication bill, which is currently pending in Senate, would mean more importers will bring in imported rice into the country in order to flood the market with rice supply.

“As long as they pay the right tariff and import legally and sell it, they can import. The tariff revenue is to improve productivity of agriculture,” Caberte said.

She added that while the quantitative restriction on rice importation will be lifted once the bill is passed, this does not mean that anyone can just import rice.

According to Senator Cynthia Villar, even if the bill will mean more importation of rice, the government continues to look out for local farmers as tariff revenues will be used to help them.

“All the proceeds of the tariff will go to the Rice Competitiveness Enhancement Fund (RCEF) which will amount to P10 billion a year. And then we will give that to the rice farmers so they can mechanize and improve their seeds,” she said in an earlier interview.

She added that the government has already identified the 57 provinces in the country and 1,110 towns whose farmers can be eligible for the RCEF.

“This is to help them compete with Vietnam because the competition with Vietnam is quite strong. So we have to tariffy and give them a fund so we can hasten mechanization and improvement of seeds which are very necessary for them to be competitive,” Villar said.

The bill will also mandate the Department of Finance (DOF) to implement a National Single Window System to prevent illegal smuggling of rice.

The Senate has already started deliberating the rice tariffication bill but could not pass it before they went on recess.

Villar said there were a lot of questions and amendments suggested by senators which was why the Senate could not approve their version right away.

Read Next
Klay on fire