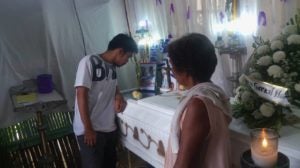 A CHICK was placed on top of her coffin purportedly to bother the conscience of her killers while her body lie in state at a roadside waiting shed in Liloan town.

A bunch of white chrysanthemums adorned her coffin. Nothing else.

Fourteen year-old Annaliza Peloriana would have wanted to be a teacher to provide a good life for her family.

Family included her three siblings and a lola who provides for their needs by washing clothes. They live in an abandoned house right at the back of the waiting shed after their home was destroyed by Yolanda.

But her dreams can no longer be realized. Analiza’s body was found dumped in a cubicle inside the old Liloan public market on Sunday morning (Oct 28) bearing 24 stab wounds.

The suspect is still being hunted.

Pastora Bravo, the 71 year-old grandmother of the victim told Cebu Daily News that at around 7 p.m. on Saturday night (Oct 27) Analiza asked permission to go with her cousins to attend a fiesta celebration near the old public market.

She said she obliged since the victim was with her cousins and an aunt, Julieta Romero.

According to Pastora, some witnesses claimed to have seen Analiza sitting alone outside an internet cafe a little past midnight on Sunday.

About a minute later, a man passed by whom Analiza reportedly asked for some loose coins so she can play in the internet cafe.

The man turned out to be the nephew of her aunt’s husband identified as one Stick John Malinao.

Malinao allegedly invited Analiza to go with him to his house to get some money so that she can play in the internet cafe.

That was the last time the victim was seen alive.

Romero revealed that the fiance of Malinao who lives in Barangay Mabolo, Cebu City claimed that the suspect allegedly confessed to her at around 3 a.m. on Sunday, that he killed a minor.

The fiance also said that she saw some bruises on Malinao’s body. The suspect, she said, immediately left after confessing to the crime.

Analiza’s siblings, Carlos Bravo, 22; Christine Bravo, 20; and Gerald Peloriana Jr., 15, are asking authorities to solve the murder of their youngest.

Their mother, Brenda died last 2008 while their father, Gerald Sr., was imprisoned eight months ago at the Cebu Provincial Detention Rehabilitation Center (CPDRC), for illegal drugs.

Kristine Wagas the section adviser of Analiza described her as an average but determined student.

Wagas said she only learned about the girl’s brutal death on Sunday afternoon.

The teacher said that they are initiating a donation drive in school to help defray her burial expenses.

Read Next
Moral of the story