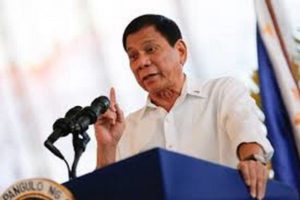 President Rodrigo Duterte on Wednesday announced that he will summon all mayors who were linked to the illegal drug trade, stressing that
illegal drugs will be a major concern Filipinos must confront in next year’s polls if they want the country to develop.

“Ipatawag nako sila ngadto. Ako na silang … Kana si Loot og mga maayong laking yawa … (I will summon them. I will … That Daanbantayan Mayor Vicente Loot and other devils),” he said in a speech during a meeting with local politicians affiliated with the Partido Demokratiko Pilipino-Lakas ng Bayan (PDP-Laban) at The Tent in Mandani Bay in Mandaue City past midnight or about 12:15 a.m. today.

He again lambasted retired police general and now Daanbantayan Mayor Vicente Loot who he earlier identified as a drug protector.

He, however, did not mention former Cebu City Mayor Michael Rama.

President Duterte arrived at The Tent in Mandani Bay at 11:59 p.m., more than five hours after his supposed 6:30 p.m. arrival.

Many of his supporters stayed to listen to the President who spoke for just about 20 minutes. He first lashed out at communists for taking over properties of government.

“Ako giingnan ang military nga kon mosukol sila, patya. Di ni taga Danao nga Duterte. Taga Mindanao ni. (I instructed the military that if these communists will fight, kill them. I am not a Duterte who is from Danao (City, Cebu). This is a Duterte from Mindanao,” President Duterte said.

They waited for over five hours. And for them, it was worth it — a presence that was equivalent to an endorsement from President Rodrigo Duterte.

For the at least 700 Cebuano politicians seeking electoral posts in next year’s midterm elections invited to have a “private dinner” with President Rodrigo Duterte, the initial excitement turned to restlessness and unease, and back to excitement again as the President arrived a minute before midnight for a dinner that was supposed to begin at 6:30 p.m.

Most of the candidates allied with Partido Demokratiko Pilipino-Lakas ng Bayan (PDP-Laban) arrived at the venue as early as 4 p.m. since they were told that the venue, The Tent in Mandani Bay in Mandaue City, would be closed by 5 p.m. in preparation for the President’s arrival and the dinner that was scheduled to begin at 6:30 p.m.

But up to 11:30 p.m., the President had yet to arrive at the venue even as sources said he had landed in Cebu and went straight to the Mactan Air Base hours earlier. By 11:59 p.m., however, the President finally came, on board a helicopter that came from the air base.

The President arrived in casual attire, dark denim jeans paired with a chocolate brown polo shirt with rolled up sleeves, the same clothes he wore when he swore in Isidro Lapeña as Director-General of the Technical Education and Skills Development Authority (Tesda) earlier on Tuesday afternoon in Malacañang.

One of the first things that the President talked about was related to his war against drugs, as he urged the candidates to watch out against the use of drug money during the elections.

Before that, however, he once again took a swipe at Cebu City Mayor Tomas Osmeña, partly saying “ni gara na gyud na sya (he is acting up).”

While waiting for the President to arrive, politicians took turns to deliver speeches, including Cebu third district Rep. Gwendolyn Garcia who appealed to political allies to help her regain the top post in the province.

“I want to bring back the pride of Cebu — to be the number one among all 81 provinces in the country,” she said in a speech during a meeting with local politicians affiliated with PDP-Laban.

Despite an earlier announcement by Davao City Mayor Sara Duterte that Cebu will be a free zone in the gubernatorial race in next year’s polls, Garcia believed she has the support of Sara’s father, President Rodrigo Duterte.

Garcia, who heads the local One Cebu party, is the gubernatorial standard bearer of PDP-Laban and will run against Cebu Vice Gov. Agnes Magpale who, in a surprise move, decided to forgo her earlier decision to retire and run instead for governor. Gov. Hilario Davide III, who initially wanted to seek reelection, opted to slide down to vice governor.

Among the personalities who attended the gathering were former Presidential Political Adviser Francis Tolentino who is running for senator,

Tolentino also challenged the candidates to “put the poor first” in their agenda, during and after the campaign; and for the Cebuanos to give the new politicians a chance to be elected in office.

“Try someone new. Sa Tagalog, bago ‘to. It stands for Bato, Go, and Tolentino para sa senado,” said Tolentino which drew applause from the audience.

Earlier, excitement filled the air as candidates and their supporters trooped to the venue for a chance to meet and be endorsed by the President despite the tight security and the long wait for the arrival of the President.

Uniformed policemen and personnel of the Traffic Enforcement Agency of Mandaue (Team) manned the streets at least a kilometer away from the venue’s entrance to secure the area and to divert regular traffic from F. Zuellig Avenue to Ouano Avenue.

The guests started to arrive at past 4 p.m. since the invitation they received indicated that the venue would be locked at 5 p.m.

Several supporters, including spouses of candidates, were not allowed entry since only the candidates were given the “nontransferable invitation.”

During the event, Garcia also announced her support for the mayoral bid of Cebu City Vice Mayor Edgardo Labella who is running against incumbent Cebu City Mayor Tomas Osmeña.

Garcia and Labella each gave their respective speeches, naming one by one the candidates running for the May 2019 elections under One Cebu and Barug Team Rama respectively.

Based on the list of guests, there were around 700 candidates vying for various positions who attended the event.

Among the names on the guest list was former Cebu City Mayor Michael Rama, who is running for vice mayor in tandem with Labella, but did not attend the gathering.

In a phone interview, Rama said he decided not to go because he did not receive an invitation.

“I decided not to join because I’m not part of PDP-Laban. It would be awkward to be there. I’m with UNA (United Nationalist Alliance),” said Rama.

He added he expected President Duterte to publicly endorse Cebuano candidates running under PDP- Laban, including his partymates from Barug.

Except for Rama and Councilors Erik Espina and Pastor Alcover Jr., all opposition candidates in Cebu City are running under PDP-Laban. Labella is the president of the PDP-Laban Cebu City Chapter.

Rama was tagged by President Duterte in 2016 as an alleged drug protector.

The former mayor has attempted to clear his name multiple times, and even underwent several drug screenings, especially before filing his certificate of candidacy (COC) last October 17 to disprove the allegations.