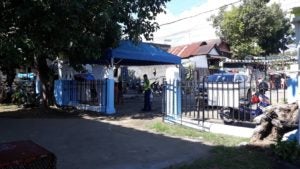 Police officers and barangay tanods were deployed in Doña Pepang Cemetery in Cebu City observation of All Saints’ Day.

This despite only a few people have arrived to visit their dead relatives.

Relatives of the Osmeñas have paid their respects for their deceased relatives whose remains were buried in Doña Pepang Mausoleum.

Caretakers of the Osmeña mausoleum said they are also expecting Cebu City Mayor Tomas Osmeña, the grandson of Doña Pepang and the former president, and his family to arrive on Thursday morning (November 1).

Aside from the Osmeñas, the cemetery is the final resting place of some prominent Cebuano families.

Read Next
National scientist to speak in UP conference