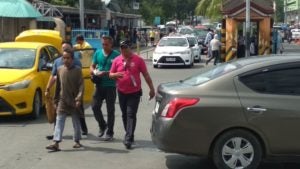 Scavenger Ceferino Angco is accompanied by port officers for his boat trip to Bohol province.

After being rescued when he attempted to swim from Cebu to Bohol to visit his departed loved ones three days before Kalag-kalag, scavenger Ceferino Angco said he will no longer return to Cebu but will instead stay in Bohol for good.

Angco, 47, hogged the spotlight when he attempted to swim from the Malacañang sa Sugbo in the South Road Properties (SRP) to Carmen, Bohol, in order to visit the tombs of his parents, because he could not afford to buy a boat ticket for home.

He started swimming at the Malacañang sa Sugbo at 11 p.m. and was rescued by the Bantay Dagat Commission in Barangay Cansojong, Talisay City, on October 28.

Talisay City Councilor Antonio Bacaltos paid for Angco’s boat fare to Bohol, as well as fruit and vegetable seeds that he could plant in Carmen.

A lot of people also went to Pier 1 on the day Angco was to return to Bohol to extend help.

In a live interview over dyRD, a local radio station in Bohol, Angco, said that he no longer has plans of returning to Cebu, due to his age.

Angco is now reunited with his elder sister, Criselda, and was able to visit the graves of his parents last Thursday, November 1, 2018.

Angco revealed that he used to live with a cousin in Barangay Labangon, Cebu City, but was forced to leave due to some misunderstanding.

He said he wandered around the city, slept on the cold sidewalk at night while collecting scraps that he could sell to buy food.

He shared that he was terrified when he started swimming because of the chilly waters and the huge waves spawned by passing ships.

His sister Criselda said she became worried when she learned that her younger brother had left their cousin’s house.

She said she would try to look for him every time she’s in Cebu.

Read Next
Priest: Present situation is like martial law years