Hundreds show up for ‘Farmers’ Day’ 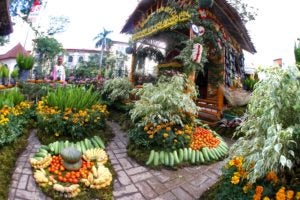 Hundreds of farmers from the city’s different barangays joined the event, organized by the Cebu City government, to showcase not only their produce but also their talents in decorating booths and floats.

Shortly before the event formally opened, at least 17 barangays paraded their floats from Jose Rizal Lane to Plaza Sugbu in downtown Cebu for the grand float parade contest.

Barangay Pamutan, on the other hand, bested 23 other participants in the booth display contest winning P25,000 worth of cash.
In an interview, Tribunalo said that they were glad that more participants joined this year’s Farmer’s Day.

“It’s the grandest and liveliest Farmer’s Day we have yet. We’re grateful for their participation,” said Tribunalo.

“One of the reasons why there’s more who joined this year is maybe because the winners of the contest will immediately receive their cash prize after being proclaimed,” she said, adding that in previous years, the release of the cash prizes suffered delays.