DEATH CAME ON HER BIRTHDAY 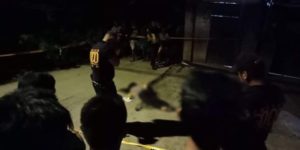 A photo of the crime scene where Cristina Jayson, a nurse of a call center company, is shot dead in Barangay Bacayan, Cebu City, pre-dawn of Saturday, Nov. 17, 2018 from the Facebook page of FAMC Rescue. (Inset photo) A smiling Cristina Jayson in the cover of her Facebook page.

She turned 27 years old yesterday, Saturday (November 17), but Cristina Jayson did not make it alive to see the sun rise on her birthday.

Jayson was shot dead a few meters away from her house in Joseville Subdivision in Barangay Bacayan, a hinterland village of Cebu City, at 1:35 a.m., or just an hour-and-a-half after the clock ticked for her birth date.

The victim was a nurse employed in a business process outsourcing (BPO) firm located at I.T. Park in Barangay Apas, and was heading for work during the wee hours of the day, which is generally considered risky when in the streets.

Investigators from the Talamban Police Station, led by Senior Insp. Alvin Llamedo, said their initial findings showed that Jayson has just left her house on her way to report for work when a male suspect shot her in the head.

Llamedo told Cebu Daily News that they are looking at love triangle and personal grudge as possible motives since none of Jayson’s belongings, such as her wallet, mobile phone, and jewelry, were stolen.

He said they already interrogated the victim’s current and former boyfriends as their “persons of interest,” but they refused to disclose their identities in order not to preempt their ongoing investigation.

“Initially, we invited the current boyfriend as the only person of interest but we received unofficial reports that the victim allegedly met her ex-boyfriend last Friday (November 16),” said Llamedo.

Jayson is the second BPO employee killed in the city. Shortly before 3 a.m. on October 3, Loraine Temple was killed by robbers in Pope John Paul II Avenue in Barangay Mabolo.

While Temple’s death prompted the Cebu City government to implement a bus system that provides free transportation for workers in I.T. Park during the ungodly hours, Jayson’s death happened six days after its launching.

This development prompted Cebu City Vice Mayor Edgardo Labella to urge the administration of Cebu City Mayor Tomas Osmeña to possibly expand the coverage of the free bus rides to mountain barangays in the city.

“This opportunity should also be provided to residents, workers, and students from the mountain barangays,” Labella said.

Presently, there are four buses deployed in Metro Colon, and another in Barangay Mabolo, to ferry workers to I.T. Park from 8:30 p.m. to 5 a.m.

The vice mayor, who belongs to the opposition Barug-PDP Laban party, also expressed alarm over the continuing cases of murders, especially that Christmas is only 37 days away.

“It’s alarming not only because of these cases’ proximity with the Holiday season but also that it is also happening in other parts in Cebu province, aside from Cebu City,” Labella added.

Sought for his comments, CDN left a message through text on Osmeña’s inbox but there was no reply as of yesterday evening. 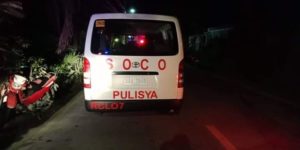 The Cebu City Police Office’s Scene of the Crime Operatives (Soco) arrive in the crime scene where the body of Cristina Jayson is found after she was shot dead pre-dawn on Nov. 17, 2018. Photo from the FAMC Rescue Cebu’s Facebook page

Llamedo, on the other hand, said they were now tracing Jayson’s activities before she was killed.

“We are still verifying this report, that’s why we don’t want to divulge yet the location provided to us,” Llamedo said.

Llamedo also said Jayson’s present boyfriend claimed he did not know the victim was in a previous relationship.

“Jayson and her current boyfriend have been together since May,” Llamedo said.

“But she and her former boyfriend were together for three years and nine months. We would also like to know if the victim and her current boyfriend were also together when the former was still committed in a relationship,” he added.

Meanwhile, an investigator said they were locating closed-circuit television cameras (CCTVs) close to the crime scene and other areas where Jayson possibly went before the crime happened.

“Hopefully we can obtain copies of these CCTV footages to hasten our investigations,” he added.

Jayson is the sixth victim killed this week, according to police reports collated by CDN from Monday (November 12) up to yesterday.

Labella, for his part, reiterated the calls for the police to increase their visibility, particularly in areas identified as prone to crimes.

“I think the police should also pursue and exert more effort in ensuring our peace and order. They should not only be making preventive measures but relentless ones aimed at addressing criminality,” Labella said.