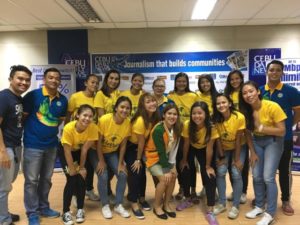 The USC women’s volleyball team were guests in the weekly CDN Sportstalk Live on Facebook yesterday.

The Lady Warriors secured the women’s volleyball title last November 24 via a sweep of the University of San Jose-Recoletos (USJ-R) Lady Jaguars.

But unlike her indoor volleyball team, which is composed of a mix of witty veterans and energetic rookies, Antigua’s women’s beach volleyball team will be made up of all rookies.

Manning USC will be Mary Louise Querubin, Jinniane Berdos and Jaslyn Geconcillo. Among the three, only Geconcillo has had experience in beach volleyball.

Antigua, during yesterday’s Cebu Daily News weekly Sportstalk Live on Facebook, said she isn’t expecting much from the trio this season.

But she’s not counting them out that easily, too.

“They may be just rookies but these are promising players,” Antigua said.

According to assistant coach Dennis Sepulvida, the team decided to choose the three since most of their veterans are getting busy with their studies.

USC starts its bid this season with a game against the Cebu Institute of Technology-University (CIT-U) this Saturday.

Their game will be part of a packed 13-game schedule on opening day.

Defending women’s champion is Southwestern University while University of the Visayas is the reigning champs in the men’s side.

Meanwhile, a refresher’s course for beach volleyball referees will be held today at the Fort San Pedro sand court from 8:30 a.m. to 5 p.m.

Read Next
House of I.T Fun Run 1 on Sunday