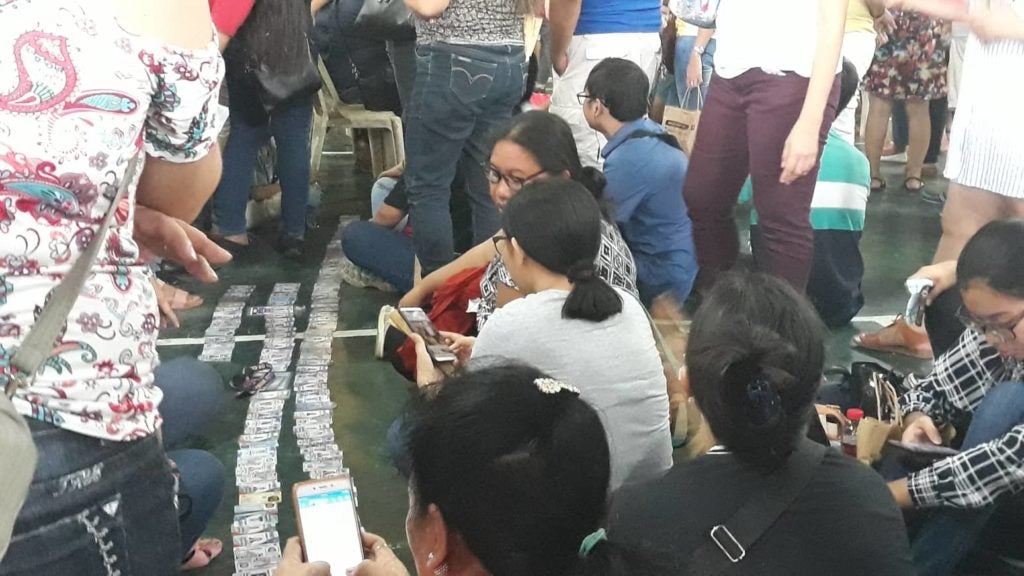 Some teachers put their PRC licenses on the floor forming a long queue as they wait for their turn to claim the P10,000 cash bonus from the
Cebu City government at the Cebu City Sports Center.

AIZA Condiman braved the heat and the long lines as she and close to 6,000 primary and secondary public school teachers in Cebu City claimed their P10,000 cash bonus from the city government on Friday.

An English teacher at the Mabolo National High School, Condiman, 29, said the bonus would be a big help for her and her fellow educators to celebrate a bountiful Christmas.

“I’m very fortunate to have received that amount from the City Hall because I’m going to buy something for my family. Maybe food and Christmas presents,” said Condiman, who gave birth to her first born last October.
The distribution was held at the Cebu City Sports Center (CCSC).

Councilor Joy Augustus Young, who is also the Deputy Mayor for Education, said that a teacher who has rendered at least one year of service is entitled to receive the cash bonus in compliance with a city ordinance.

It is, according to Young, also the city’s way of recognizing the effort of the teachers in educating the youth.
“That’s P10,000 per teacher (in primary and secondary schools). That’s already an ordinance, and a law,” said Young.

The distribution of cash bonuses which started as early as 8:30 a.m. yesterday, was supposed to be postponed because of the delay in the processing due to power interruptions at City Hall resulting from the fire that struck Unit III of Carbon Public Market on Thursday.

The city ordinance titled “Cash Bonus Ordinance to all Primary and Secondary Public School Teachers Every Year in the City of Cebu and Providing Funds” was passed in 2016. Distribution is scheduled every December.
Young said those who were not able to claim their bonus may still do so at City Hall next week.

“All they have to do is present their I.D.,” he added.

Aside from cash, exciting prizes were also raffled off including a motorcycle and appliances such as a television set, gas range, and microwave oven, for those who joined the Teacher’s Day program held later yesterday.