‘Prepare selves for prayers, not parties’ 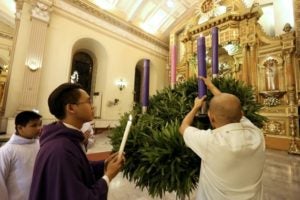 One of four candles of The Advent wreath is lighted at the Cebu Metropolitan Cathedral to mark the event in this Dec. 1, 2017 file photo.

As the world entered the first day of the last month of the Western calendar year, the Catholic Church called on their faithful to “spiritually prepare themselves” for the annual observance of the Advent season.

“(The Advent) celebrates the two comings of Jesus Christ. Ang iyang (His) coming as a Man during Christmas Day. The second His coming as King and Judge at the end of days,” said Msgr. Joseph Tan, spokesman of the Archdiocese of Cebu.

Tan said the Advent looks both on the past and the future and as such, the faithful should not be fixated on “outward preparations” for Christmas such as decorations, parties and gift-giving.

He said the celebration of Christmas is more meaningful when there is reconciliation and forgiveness among people.

Tan said the Advent also marks the chronological beginning of the liturgical calendar in the church.

In Catholic churches in Cebu and the rest of the world, the first Advent candle is lighted.

Tan said the tradition of putting up Advent wreaths with four candles has a special meaning.

Four candles on the wreath — three purple and one rose or pink — are lighted every Sunday of the season in churches as well as at home.

The candles symbolize the four weeks of Advent, which symbolize 4,000 years from the time of Adam and Eve to the birth of Jesus Christ.

The rose-colored candle is lighted on the third Sunday of Advent also known as “Gaudete” or joyful Sunday.

The rose color is a symbol of joy. Advent ends on the sunset of Dec. 24.

The circular shape of the Advent wreath represents the eternal God, who neither has a beginning nor an end.

While the color green stands for hope.