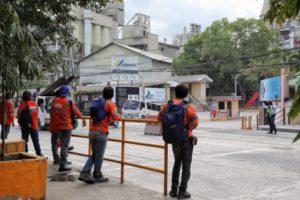 The Apo Cement Corp. in Naga City, Cebu will no longer proceed with its planned lay-off of at least 64 employees.
CDN FILE PHOTO

IT WILL still be a merry Christmas for employees of Apo Cement after the company announced on Tuesday that it will no longer implement the planned temporary lay-off of 64 workers which is supposed to take effect on December 13.

“DOLE (Department of Labor and Employment)-7 wrote a letter to us to kindly consider our position to implement a temporary lay-off for humanitarian reason because our colleagues are also important to us,”Apo-CEMEX spokesperson Chito
Maniago said.

Maniago, however, told CDN that the plan to implement a compressed work schedule of four days a week for around 120 employees will still be discussed.

APO Cement earlier sent a notice to DOLE-7 that they will implement a temporary lay-off and compressed work schedule on December 13 and December 22, respectively following the suspension of their quarry operations.

DOLE-7 regional director lawyer Johnson Cañete revealed that they also wrote a letter to the secretary of the Department of Environment and Natural Resources (DENR) to help fast track the lifting of the suspension order against Apo Land and Quarry Corporation (ALQC).

The slide claimed 78 lives with five still missing. A total of 18 people were also pulled out alive from the rubble.

“Hopefully the secretary of DENR and DOLE can discuss the possibility of lifting the suspension so that they will no longer suspend other workers and impose a compressed work per week,” Cañete said.

Cañete also assured affected workers that they will implement interventions through emergency employment and livelihood grants to help them.

He revealed that more or less 350 Apo workers who were affected by the landslide will be prioritized in their emergency employment program.

Cañete however said, that since DOLE has already exhausted its funds for this year, they will implement their emergency employment scheme next year.

The special program will give each worker a minimum wage of P386 per day.

The workers will be assigned in their barangay, Cañete said, adding that they will also require the barangay to submit a work program good for one month.