Cebu City Hall to set up own ‘Angkas’ 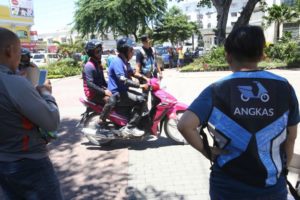 With Angkas operations derailed, Cebu City Hall will set up its own motorcycle-for-hire system to transport commuters to their destinations.

Cebu City Hall plans to set up its own version of Angkas, a motorcycle-for-hire (habal-habal) ride-hailing application, if only to provide an alternative transport choice for city residents especially those from the mountain barangays.

“We are also exploring the legality of an LGU (local government unit) producing its own Angkas-like program to make up for the loss of Angkas. We will do everything we can to benefit the public good,” Cebu City Mayor Tomas Osmeña said in his Facebook post.

The mayor announced this a day after the Supreme Court (SC) issued a temporary restraining order (TRO) for Angkas to suspend its operations.

The SC issued the TRO against a lower court ruling that prevents the Land Transportation Franchising and Regulatory Board (LTFRB) from interfering with the operations of Angkas.

Last September, the Mandaluyong City Regional Trial Court allowed Angkas to operate once again, 10 months after the government prevented them from doing so.

This meant that law enforcers in Cebu will not yet apprehend Angkas drivers, pending any advisory from LTFRB-7.

“We have not received any particular instructions yet from LTFRB-7 to arrest operating Angkas drivers. Once we have the directives, we will enforce the TRO. But they will be apprehended if they violate traffic rules,” said Senior Insp. Arieza Otida, Cebu City police spokesperson.