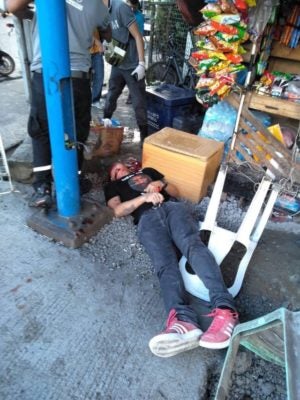 Paramedics find Chad Christian Noval lying in a pool of his blood after an unidentified gunman shot him in the head and body at 6:40 a.m. on Saturday near a mall at the Mandaue Reclamation Area.

A MOTORCYCLE-RIDING gunman shot dead a 36-year-old drug surrenderer, just a few meters away from a Special Weapons and Tactics (SWAT) detachment at a mall in the Mandaue Reclamation Area at 6:40 a.m. on Saturday (Dec. 15).

Chad Christian Noval of Barangay Alang-Alang, Mandaue City died after he was shot four times in the head and body by a gunman wearing a bonnet, said Chief Insp. Mercy Villaro, Mandaue City Police Office information officer, in a phone interview on Saturday.

Villaro said that according to investigation that Noval was a drug surrenderer, and allegedly a former convict, who allegedly served time for drugs.

She said that witnesses told police on Saturday that Noval was sitting at a sidewalk vendor’s stall when the man wearing a bonnet arrived on a motorcycle scooter, got off, and approached the victim from behind.

Villaro said that the unidentified gunman then pulled out a gun and shot Noval four times, hitting the victim in the head and body.

The gunman then fled on his scooter.

Responding paramedics found the victim lying on a pool of his blood.

The victim was rushed to the Mandaue City Hospital but the doctor there declared him dead on arrival.

Police were still investigating the killing and were trying to find out the motive of the fatal attack.