The stories that made a difference 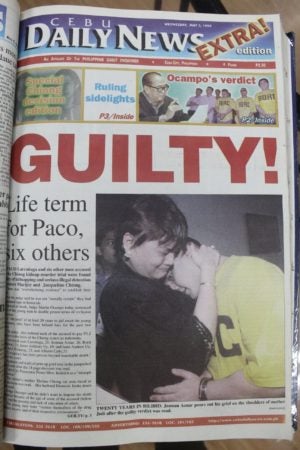 The Cebu Daily News’ May 5, 1999 Extra Edition issue about the guilty verdict against Paco Larranaga and six others in the killing of the Chiong sisters (left photo) was a monster hit when it hit the streets. Nearly 2 decades later, CDN continues to come out with innovative sections like its monthly CDN Spotlight which features personalities like Archbishop Jose Palma, and focuses on developing its online platform with stories and photos appealing to its thousands of followers like the handcrafted gown of recycled materials of Tribu Kandaya dancer, Isabel Luche (right).

The story chronicling the arrest of human trafficker Liezyl Margallo in Malapascua Island on January 26, 2017, and the crime-riddled life that she left in the cities of Malaybalay and Cagayan de Oro was capped by an unexpected turn of events.

After arresting officers from the National Bureau of Investigation (NBI) labelled Margallo as “savage” for her multiple crimes committed against children — from human trafficking to sexual abuse and even murder — a fresh debate on the death penalty was sparked.

Who would have thought that Margallo’s photos splashed on the front pages of Cebu Daily News, accompanied by a caption about her past criminal life in Mindanao, would lead to a host of comments on the article with people asking whether or not it was time for the Philippines to restore the death penalty as capital punishment.

When the CDN story, ‘Savage Girl’, was published online, the paper’s Facebook page was flooded with angry reactions directed against Margallo and other human traffickers.

In just two-days, Savage Girl went viral; and by the end of 2017, topped INQUIRER.net’s list of most viewed articles for the year.

Most of the netizens’ comments called for the revival of the death penalty on child abusers like Margallo and her co-accused, Australian
pedophile Peter George Scully, who was also earlier arrested for his involvement in an international syndicate that dealt with child trafficking online.

In follow up stories on Margallo published by CDN, more Cebuanos weighed in on her arrest expressing their opinions on the problem of sex trafficking in the country.

The stories’ impact created waves, even abroad as people from across the globe expressed dismay that the Philippines apparently lacked measures to prevent international human traffickers from preying on Filipino children.

To this day, CDN would look back at the story, and how the team stuck to the company’s vision of ‘journalism that builds communities’ in the ever-changing digital platform.

The story on Savage Girl, which now has 822,000 shares, is just one of the many successes of CDN as it continues to gain hundreds of followers in the digital realm.

The following is a glimpse of how the entire CDN editorial team developed many of Cebu’s biggest stories through the years. 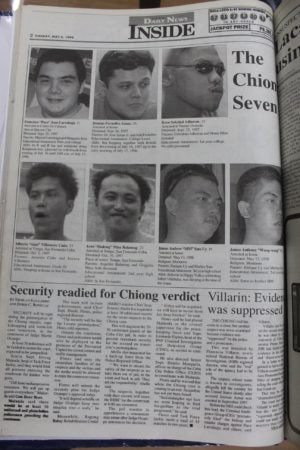 It all started with a report that two young siblings, Marijoy and Jacqueline Chiong, were forced into a vehicle by a group of men while waiting for their father to pick them up outside a mall in Cebu City in the evening of July 16, 1997.

Two days later, Marijoy’s body was found dead at the bottom of a ravine in Carcar City, 42 kilometers south of Cebu City. Jacqueline was never found.

When RTC Judge Martin Ocampo handed a guilty verdict on the ‘Chiong Seven’ (seven young men, some of them scions of prominent families in Cebu, accused in the disappearance of the sisters) in the morning of May 5, 1999, CDN editors decided that the story had to be told right away.

By early afternoon, 20,000 copies of the four-page special edition carrying the banner “GUILTY!” were printed.

Before sundown, the paper sold out. The extra edition, the first ever to be printed by CDN, was a monster hit.

The story again involved Ocampo, the controversial judge who meted the life sentence on the Chiong Seven.

Shock and disbelief poured as the story on Ocampo’s death, purportedly from suicide inside a room in a posh hotel on Mactan Island, hit the streets.

Some suspected it was murder; after all, the judge’s body was “badly bruised and cut” said the CDN extra. He was 67.

In 2015, CDN published a story on Francisco “Paco” Larrañaga, one of the suspects, who was working part-time as a chef in Spain.

Paco, a Spanish citizen, was transferred to a maximum-security prison in Soto del Real, Madrid, Spain named the Madrid Central Penitentiary in 2009 in line with a Treaty of Sentenced Persons signed between the Philippines and Spain.

When the story about the Chiong sisters’ disappearance was adapted into a film in 2018, netizens dug up CDN’s online story on Paco’s life in Spain.
For three days, the story titled ‘Paco now works as a chef in Spain’ was in CDN’s Top 10 stories on Facebook. 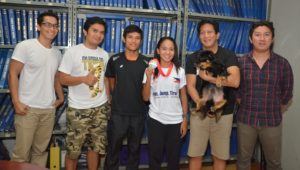 The Sinulog Festival each January — considered Cebu’s biggest event — had the CDN team scrambling for ways to cover the festival in the most comprehensive way even amid a signal shutdown in 2017, enforced by local authorities, as part of beefed-up security measures.

Online updates, starting from the solemn procession up to the fireworks display at the Cebu City Sports Center marking the end of the celebration, were constantly given to CDN readers.

The team was also the first to release a photo of a dancer from Tribu Ginatilan during the Sinulog sa Kabataan sa Lalawigan who was a dead ringer for Hollywood singer and actress Selena Gomez.

The dancer turned out to be Gerhicka Carcueva, 17, a Cebuana-Swiss senior high school student of the Divine Life Institute of Cebu Inc. (DLIC).
The photo reached over 46,000 people and was shared hundreds of times.

Since CDN followers still wanted to know more about the young dancer, a Facebook Live interview was conducted with Carcueva.

A year later during Sinulog 2018, CDN would again be the first to spot what had become, an internet sensation — the costume of Daanbantayan’s Festival Queen.

Tribu Kandaya’s Isabel Luche was wearing a handcrafted gown made out of recycled materials to form a three-dimensional rice terraces with houses and carabaos on top.

The design was made by her cousin, Mark Barry Luche, who also happened to be the contingent’s head choreographer.

In an interview with CDN, Mark said the costume, which cost him only P6,000 to make, was meant to pay homage to the simplicity and diversity of life in the province.

The CDN photo of the costume drew the attention of over 100,000 netizens on Facebook who did not hesitate to share it over a thousand times. The netizens’ shares bore captions of adoration and awe for Cebuano ingenuity.

The victory of Southeast Asian Games gold medalist Mary Joy Tabal, led CDN editors to come up with a monthly Spotlight section that features information on some of Cebu’s less known individuals and officials that have made a great impact.

Embracing Spotlight’s maiden edition was no other than the champion marathon runner herself, Tabal, who enumerated her crushes during the interview — much to the delight of online viewers.

Quisumbing’s Spotlight edition was filled with stories about his love for the film, Star Wars.

Spotlight also featured Cebu Archbishop Jose Palma who shared to CDN his daily life as the leader of Cebu’s largest religious group, the Archdiocese of Cebu, and his past aspirations before devoting a life to God.
(To be continued)

Read Next
Roro port project up for bidding in 2019